What Are Capital Markets? Definition, Examples

Buyers and sellers interacting in a common space use wealth to create more wealth.

Essentially, capital means financial assets, usually in liquid form. Capital markets exist when two groups interact: those who are seeking capital and those who have capital to provide. Capital, in this context, means money or financial assets that can be converted to money.

The capital seekers are the businesses and governments that want to finance their projects and enterprises by borrowing or selling equity stakes. The capital providers are the people and institutions who are willing to lend or buy, expecting to realize a profit.

Contents hide
1 A capital idea
2 Other products, other markets
3 Primary and secondary markets
4 The price is right

Investment capital is money that you put to work. You might invest your capital in business enterprises of your own to realize a profit or fund a nonprofit enterprise. But there’s another way to achieve a similar goal.

By participating in the stock and bond markets, which are the pillars of the capital markets, you commit your capital by investing in the equity or debt of issuers that you believe have a viable plan for using that capital. Because so many investors participate in the capital markets, they make it possible for entities to raise substantial sums — enough to carry out much larger projects than might otherwise be possible.

There are times when individual investors play a different role in the capital markets and become seekers, rather than suppliers, of capital. The best example is a mortgage.

All of these things would be more difficult — perhaps even impossible — to achieve without the financing provided by the capital marketplace.

Other products, other markets

Some capital markets are more effective than others in stimulating and supporting economic growth, so they attract large numbers of capital providers and capital seekers eager to compete for the best deals. Among the factors contributing to a market’s appeal are its efficiency, its liquidity, and investor confidence that trades will be cleared and settled quickly and accurately. In this context, efficiency means that market participants have ready and inexpensive access to all the information affecting market prices. Liquidity means that trading is active and capital flows are steady.

The capital markets aren’t the only markets around. To have a market, all you need are buyers and sellers — sometimes interacting in a physical space, such as a farmer’s market or a shopping mall, and sometimes in an electronic environment.

There are a variety of financial markets in the economy, trading a range of financial instruments. For example, currency markets set the values of world currencies relative to each other. In this case, market participants exchange one currency for another either to meet their financial obligations or to speculate on how the values will change.

Similarly, the commodity futures market and the money market, among others, bring together buyers and sellers who have specific financial interests.

There are actually two levels of the capital markets in which investors participate: the primary markets and the secondary markets.

Businesses and governments raise capital in primary markets, selling stocks and bonds to investors and collecting the cash. In secondary markets, investors buy and sell the stocks and bonds among themselves — or more precisely, through intermediaries. While the money raised in secondary sales doesn’t go to the stock or bond issuers, it does create an incentive for investors to commit capital to investments in the first place. 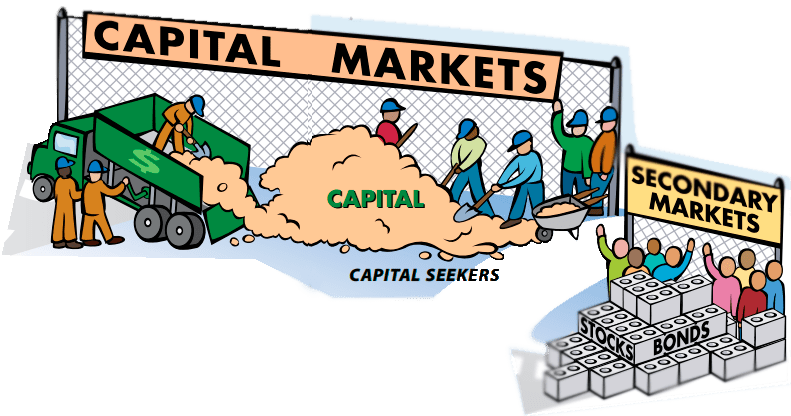 Many investors put money into securities hoping that prices will rise, allowing them to sell at a profit. They may also anticipate earning interest or dividends. In addition, in an active secondary market, they can liquidate publicly traded securities easily, though not always at a profit.

Some capital seekers may offer less liquid, or sometimes illiquid, nontraded or private placement investments. Qualified investors may be willing to accept the greater risks these alternatives pose for access to their potentially higher returns.

The price is right

One of the most notable features of both the primary and secondary financial markets is that prices are set according to the forces of supply and demand through the trading decisions of buyers and sellers. When buyers dominate the markets, prices rise. When sellers dominate, prices drop.

You’ve undoubtedly experienced the dynamics of market pricing if you’ve ever haggled with a vendor. If the two of you settle on a price at which you’re willing to buy and the vendor is willing to sell, you’ve set a market price for the item. But if someone comes along who is willing to pay more than you are, then the vendor may sell at the higher price.

If there are a limited number of items and many buyers are interested, the price goes up as the buyers outbid each other. But if more sellers arrive, offering the same item and increasing the supply, the price goes down. So the monetary value of a market item is what someone is willing to pay for it at a given time. In fact, price often serves as an economic thermometer, measuring supply and demand. One of the problems in command economies, in which prices are set by a central government authority instead of the marketplace, is that, without changing prices to clue them in, producers don’t know when to adjust supplies to meet demands, resulting in chronic overstocks and shortages.

What Are Capital Markets? Definition, Examples by Inna Rosputnia