The value of a bond is determined by the interest it pays and by what’s happening in the economy.

In most cases, once a bond is issued, its interest rate doesn’t change, even though market interest rates do. If the bond is paying more interest than new bonds with the same credit risk and term, you, as an investor, may be willing to pay more than its face value to own it.

Those price fluctuations produce much of the trading that goes on in the bond market. Suppose that a corporation floats a new issue of bonds paying 6% interest, and if it seems like a good investment, you buy some bonds at the full price, or par value, of $1,000 a bond. Two years later, interest rates are up. If new bonds pay 8% interest, no buyer will pay full price for a bond paying 6%. To sell your bonds, you’ll have to offer them at a discount, or less than you paid. If you must sell, you might have to settle for a price that wipes out most of the interest you’ve earned. But consider the reverse situation.

If, three years later, new bonds offer only 3% interest, you’ll be able to sell your 6% bonds for more than you paid — since buyers will pay more to get a higher interest rate. That premium, combined with the interest payments for the last three years, provides your profit, or total return. 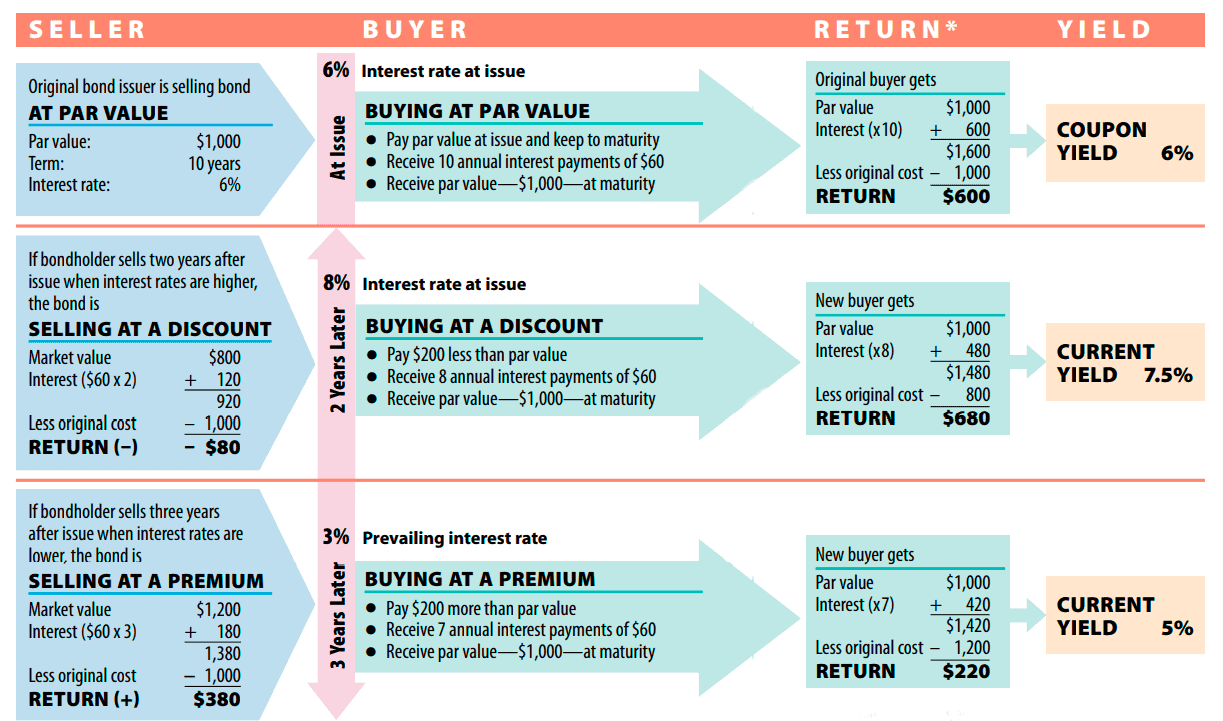 The relationship of the yields on bonds of the same credit quality but different terms can be represented as a yield curve, a graph that’s created by plotting the yields of long- and short-term US Treasury issues, which are backed by the creditworthiness of the US government.

Normally, longer-term bonds provide a higher yield, and the result is a positive curve — higher to the right. But if short-term rates are higher, the curve moves the other way — higher to the left. That’s a negative or inverted curve, and it’s more unusual. In other cases, the line is essentially flat. That happens when there is very little difference in yields between the shortest and the longest maturities. The structure of the current yield curve is one of the market indicators that bond analysts evaluate in trying to determine where interest rates are headed. 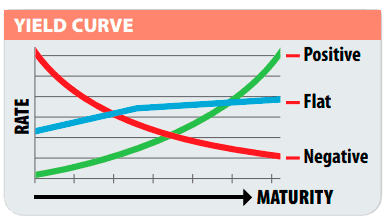 Yield is what you earn, expressed as a percentage of what you invested. There are several ways to measure yield, so it’s important to know which one you’re looking at when you compare bonds. Coupon yield is the most basic type. It’s calculated using the face value of the bond as the price, and the yield is always the same as the bond’s interest rate, or coupon. So, for example, the coupon yield for a bond with a par value of $1,000 that’s paying annual interest of $60 is 6%.

You can use this ratio to find coupon yield and current yield.

But if you buy a bond in the secondary market, you probably won’t pay par. The current yield is based on the current, or market, price of the bond. One measurement of yield, which is widely quoted by bond tables and brokers, is a more complicated calculation known as yield to maturity (YTM). As the name suggests, YTM accounts for all a bond’s earnings, on a percentage basis, from the time of the calculation until it matures.

YTM includes the money you’ll gain or lose (based on the price you paid) when par value is returned, all the interest the bond pays over its lifetime, and interest-on-interest, which is what you’d earn by reinvesting payments at the same coupon rate. Because YTM assumes both that you reinvest every single payment at the same rate and that you hold the bond to maturity, your chances of actually realizing the YTM rate are slim. But it’s a way to estimate a bond’s total earnings potential. For example, you might compare the YTM for two bonds you are considering as possible investments.