Choosing The Right Types Of Bonds To Invest In

Like the word security, which once meant the written record of an investment, the word bond once referred to the piece of paper that described the details of a loan transaction. Today bond describes a vast and varied market in debt securities.

Plain vanilla bonds pay a fixed rate and mature at a set time. Others, with lots of bells and whistles, may suit your investment needs but expose you to risks you hadn’t anticipated. So it’s essential to be on the lookout for potential red flags.

Callable bonds don’t always run their full term. The issuer may call the bond, which means paying off the debt before the maturity date. The process is called redemption. The first date a bond is vulnerable to call is stated at the time of issue.

Callable bonds come with either a call schedule, which lists specific dates and prices at which a bond can be called, or a date beyond which the issuer could call the bond at any time.

Issuers may want to call a bond if interest rates drop. That way they can pay off their outstanding debt and float new bonds at a lower rate. (It’s the same idea as refinancing a mortgage to get a lower interest rate with lower monthly payments.) Sometimes only part of an issue is redeemed, rather than all of it. In that case, the bonds to be called are chosen by lottery. Some bonds are issued with a sinking fund, which is a cash reserve set aside specifically to retire portions of the bond issue before maturity.

Callable bonds can be less attractive to investors than non-callable ones because an investor whose bond has been called is often faced with reinvesting the money at a lower, less-attractive rate. To reassure bondholders expecting long-term steady income, call provisions usually specify that a bond can’t be redeemed before a certain number of years, such as five or ten.

Sometimes issuers offer to redeem bonds at a premium, or a price higher than par, to make the bonds more attractive. But this could result in a capital gain if the premium price is higher than the price an investor paid to buy.

A subordinated bond is one that will be paid after other loan obligations of the issuer have been met. Senior bonds are those with stronger claims. Corporations sometimes sell senior and subordinated bonds in the same issue, offering higher interest and a shorter term on the subordinated ones to make them more attractive.

Floating-rate bonds promise periodic adjustments of the interest rate to persuade you that you aren’t locked into what seems like an unattractively low rate.

Pre-refunded bonds are corporate or municipal bonds, usually, AAA-rated, whose repayment is guaranteed by a second bond issue. The money the issuer raises with the second bond is usually invested in US Treasury securities, timed to mature at the first bond’s initial call date. Pre-refunded bonds typically offer a lower-than-average coupon rate and are called at the first opportunity. 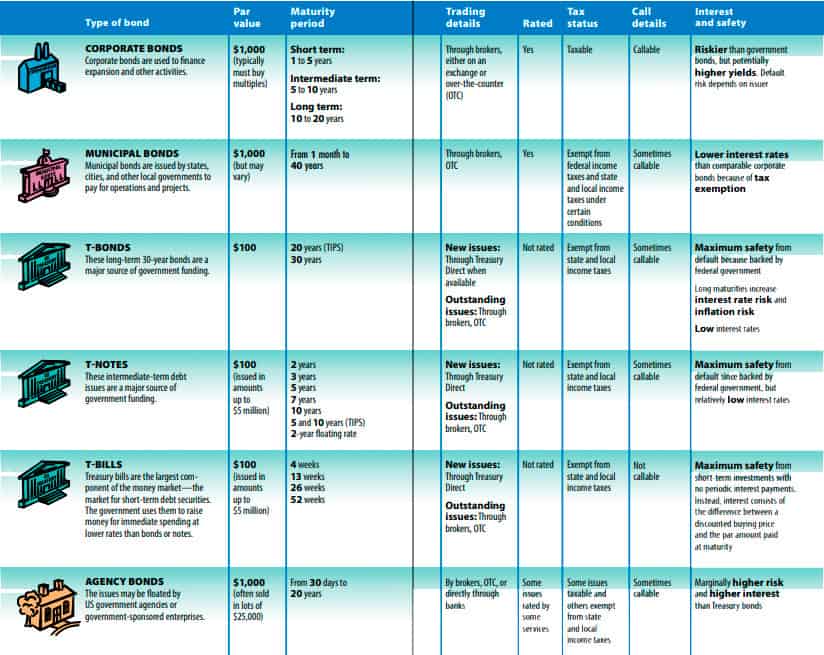 Insured bonds are backed by bond insurance. If the issuer can no longer make timely interest payments, the insurer pays. But the reduced risk generally means the bonds are offered at a lower-than-average coupon rate.

Bonds with equity warrants are corporate bonds that give investors the right to buy the issuer’s stock at a certain price on a specific date.

Put options give investors the right to redeem a bond before maturity at par value. In general, put bonds are issued at a lower-than-average coupon rate because they have what amounts to an escape clause that most bonds don’t provide.

Convertible bonds give you the option to convert, or change, corporate bonds into company stock instead of redeeming the bonds for a cash repayment. The terms, set at issue, include the date the conversion can be made and how much stock each bond can be exchanged for. The conversion option lets the issuer offer a lower initial interest rate and makes the bond price less sensitive than conventional bonds to changes in the interest rate.

The dual appeal of convertibles, from an investor’s perspective, is that they provide higher yields than are typical with common stock, and, at the same time, some of the opportunity for growth that stock offers. That’s one reason they’re sometimes described as hybrid investments.

There’s some downside protection. If the stock price falls, the convertible will be affected. But because factors that negatively affect stocks sometimes positively affect bonds, the issue is likely to retain much of its value. There are risks, though. Convertibles are usually subordinated debentures, which means they’re at the end of the line if the issuer defaults. Most convertibles are also callable, and the issuer is likely to exercise that right if the stock price begins to rise. That would limit any potential profit.

Zero-coupon bonds are a popular variation on the bond theme for some investors. Since coupon, in bond terminology, means interest, a zero-coupon by definition pays out no interest while the loan is maturing. Instead, the interest accrues, or builds up, and is paid in a lump sum at maturity.

You buy zero-coupon bonds at a deep discount, or prices far lower than par value. When the bond matures, the accrued interest and the original investment add up to the bond’s par value.

Bond issuers like zeros because they provide an extended period to use the money they have raised without paying periodic interest. Investors like zeros because the discounted price means you can buy more bonds with the money you have to invest. You can also buy bonds of different maturities, timed to coincide with anticipated expenses, such as college tuition bills, for example. What’s more, there’s no reinvestment risk with zeros since you have no interest payments to reinvest. Amounts you’ve earned but haven’t been paid compound exactly at the yield-to-maturity rate.

Zeros have two potential drawbacks. They are extremely volatile in the secondary market, so you risk losing money if you need to sell before maturity. And, unless you buy tax-exempt municipal zeros or invest through a tax-deferred account, you have to pay taxes every year on the interest you would have received had it, in fact, been paid.