Investors line up to make loans to the US government.

The US Department of the Treasury issues a variety of debt securities to raise money that, along with the taxes it raises and other revenues it collects, helps to pay for government operations. The amount the Treasury can borrow — known as the public debt — is authorized by Congress, as is the annual budget that determines how much the government needs to raise.

Investors of all types — individuals, corporations, state and local governments, Federal Reserve Banks, and non-US governments and institutions — own Treasury issues. They’re sometimes described as safe harbor investments because they’re considered essentially free of credit risk and safe from default. Like all debt securities, though, individual US issues are subject to market risk, which means their market prices and yields are affected by changing interest rates and investor demand.

The US Treasury offers six types of marketable securities that can be held to maturity or traded in the secondary market after issue. They differ from each other in the length of term, the frequency with which they’re offered, the interest rates they pay, and when the interest is paid. The range of issues includes bonds, with 30-year terms, notes, with 2-, 3-, 5-, 7-, or 10-year terms, and bills, with 4-, 13-, 26-, and 52-week terms. You can also buy inflation-indexed notes and bonds known as TIPS (for Treasury Insurance Protected Securities). They’re available with maturities of 5, 10, or 20 years.

The newest type — floating rate notes (FRN) — were introduced in 2014. They’re issued with 2-year terms and, unlike other notes, their interest rate changes quarterly, based on the 13-week T-bill rate, and is paid quarterly. Bills, notes, and bonds — including TIPS notes and bonds and FRNs — are sold in $100 increments, and you can invest as little as $100 or as much as $5 million each time you make a purchase. You buy bills at a discount to par and receive par at maturity. The difference between those amounts is the interest. Interest on bonds and notes except FRNs is paid semi-annually at a fixed rate. With TIPS, the principal is adjusted twice a year, based on changes in the Consumer Price Index (CPI), and interest is paid semi-annually on the inflation-adjusted principal.

Like Treasury bills, Treasury STRIPS are zero-coupon securities that are sold at a deep discount. They’re available only through a financial institution or broker-dealer. You aren’t paid interest in regular installments over the term. Instead, the interest accumulates, and you receive it in a lump sum at maturity. However, you owe taxes each year on the accruing interest. STRIPS are free from credit risk, but market prices can be volatile during the issue’s term.

What are on-the-run bonds?

On-the-run Treasurys are the latest issues in a particular maturity. For example, all the notes sold in the most recent auction of 10-year notes would be the on-the-run 10-year issue. Any 10-year notes issued previously would become off-the-run.

When the financial press talks about Treasurys, it’s generally talking about on-the-run issues because they’re most in-demand and the most frequently traded. So they’re often more expensive than off-the-run issues, even if the coupon and maturity are almost identical. This makes off-the-run issues a potential bargain.

The US Treasury sells its bonds, notes, and bills through public auction in which individuals can participate by making non-competitive bids. You can buy directly, by enrolling in a program known as TreasuryDirect, or through a broker or bank. As an auction takes place, the Treasury accepts competitive bids, starting with the lowest rate that’s bid and gradually accepting higher bids until the quota for that auction is filled. That rate becomes the auction rate. All the competitive bidders who bid rates lower than the cut-off bid have their orders filled at the auction rate, as do all non-competitive bidders. However, institutions that bid the cut-off rate may not be able to invest as much as they would like if the quota is already filled.

Treasury bills are auctioned every week. The 2-, 3-, 5-, and 7-year notes and FRNs are auctioned once a month, the 10-year notes eight times a year, and 30-year bonds four times a year. The frequency of those auctions changes from time to time, depending on the government’s need for cash. You can get current auction information by visiting the TreasuryDirect website. Like other debt securities, Treasurys can be traded in the secondary market after issue, and their prices fluctuate to reflect changing demand. Details of those trades, in the order of maturity date, are reported regularly. In fact, the changing yield on 10-year notes and 30-year bonds are used as benchmarks for evaluating the current state of the securities markets and the economy as a whole. 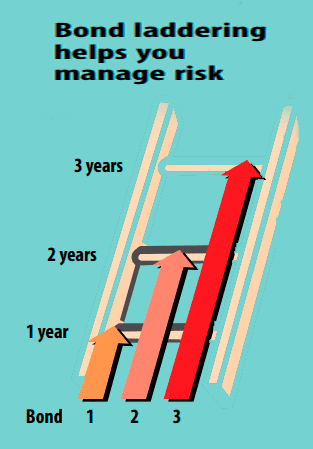 Individual investors may use a strategy called laddering when they invest in Treasury issues or other fixed-income products. The goals of laddering include:

US Treasury Securities by Inna Rosputnia