What Are Bonds And How Do They Work?

Bonds are loans that investors make to corporations and governments. The lenders earn interest, and the borrowers get the cash they need.

A bond is a loan that pays interest over a fixed term, or period of time. When the bond matures at the end of the term, the principal, or investment amount, is repaid to the lender, or bondholder.

Typically, the rate at which interest is paid and the amount of each payment is fixed at the time the bond is offered for sale. That’s why bonds are known as fixed-income securities. It’s also why a bond may seem less risky than an investment whose return might change dramatically in the short term.

A bond’s interest rate is competitive. This means it is comparable with that of other bonds of similar risk and term being issued at the same time and reflects the cost of borrowing in the economy at large. 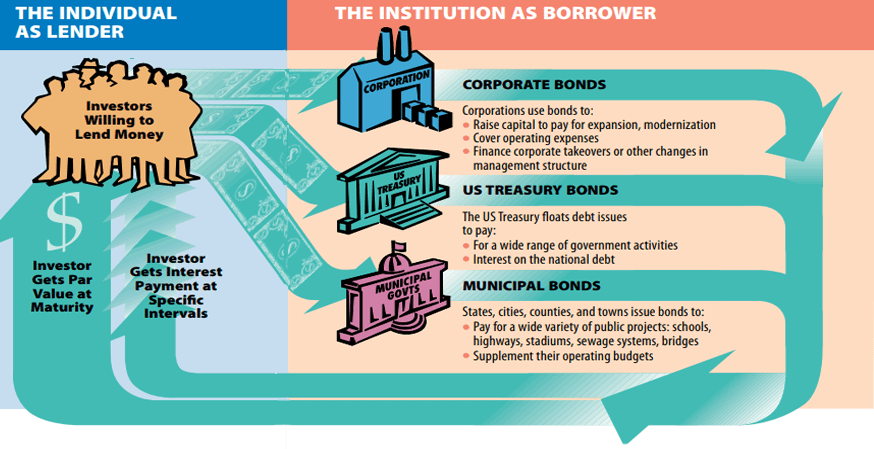 You can buy bonds issued by US companies, by the US Treasury, by cities and states, and by various federal, state, and local government agencies. Many overseas companies and governments also sell bonds to US investors. When those bonds are sold in dollars rather than the currency of the issuing country, they’re sometimes known as Yankee bonds. The advantage for individual investors is that they don’t have to worry about currency fluctuations in figuring the bond’s worth or interest payments.

When companies need to raise money, they often prefer issuing bonds to issuing stock. New stock tends to dilute, or reduce, the value of an existing stock. What’s more, companies may raise more money through a bond offering and can deduct interest payments on their tax returns. But bonds are debts that must be repaid. Too much debt can be a major drag on a company’s success.

Unlike companies, governments can’t issue stock because they have no equity to sell. Bonds are the primary way they raise money to fund capital improvements and keep everyday operations running when revenues, such as taxes and tolls, aren’t available to cover current costs.

THE LIFE OF A BOND

The life, or term, of any bond is generally fixed at the time of issue. It can range from short- (usually a year or less), to intermediate- (two to ten years), to long-term (more than ten years). Generally speaking, the longer the term, the higher the interest rate that’s offered to make up for the additional risk of tying up your money for a lengthy period. If interest rates are low and seem likely to rise in the fairly near future, you may decide to stick with short- or intermediate-term bonds.

There are two ways to make money with bonds: income and capital gains. Conservative investors use bonds to provide a steady income. They often buy a bond when it’s issued and hold it, expecting to receive regular interest payments until the bond matures and the principal is paid back. Then, they can invest in a new bond. Other investors may trade bonds, or buy and sell as they might with stocks, hoping to increase their total return.

It’s also possible to sell bonds at a profit when interest rates fall. For example, investors may be willing to pay more than the face value of an older bond paying 8% interest if new bonds are paying 5%. An increase in the price of a bond, or capital appreciation, may produce more profits than holding bonds to maturity.

When a company or government wants to raise cash, it tests the waters by floating a bond. That is, it offers the public an opportunity to invest for a fixed period of time at a specific rate of interest. If investors think the rate justifies the risk and buy the bond, the issue floats.

There are risks in bond investing. Issuers could default. If interest rates go up, you can lose money if you want to sell an older bond paying a lower rate of interest because potential buyers will typically want to pay less than you spent to buy it. Inflation is another risk. Since the amount you earn on a bond usually doesn’t change, its value can be eroded over time. For example, if you have a 30-year bond paying $50 annual interest, the income will buy less at the end of the term than at the beginning.

For corporations, issuing a bond is a lot like making an initial public offering. An investment firm helps set the terms and underwrites the sale by buying the bonds from the issuer. In cooperation with other companies, together known as a syndicate, it then offers the bonds for sale. The underwriter profits from the fees the issuer pays and the spread between the cost of buying the bonds and what it earns from selling them. If demand lags, it may need to reduce the price and even take a loss.

After issue, bonds trade in the secondary market, which means they are bought and sold through brokers, similar to the way stocks are. The issuer gets no money from these secondary trades. US Treasury issues, with a face value, or par, of $100, are available directly to investors through an online system called Treasury Direct or through brokers. Most agency bonds and municipal bonds are sold through brokers, who buy bonds in large denominations and sell pieces of them to individual investors.

What Are Bonds And How Do They Work by Inna Rosputnia