10 Types Of Investment Risks And How To Cope With It

Recognizing the threats to your goals can help you figure out diversionary tactics. For you, as an investor, risk means the possibility that you’ll lose some or all of your principal, or that the return your principal provides won’t be enough to meet your financial goals.

Return is your profit or loss on an investment, which is based on dividend or interest earnings plus increases or decreases in value.

Risk comes in several forms, and so do the strategies you can use to help protect your investment portfolio. 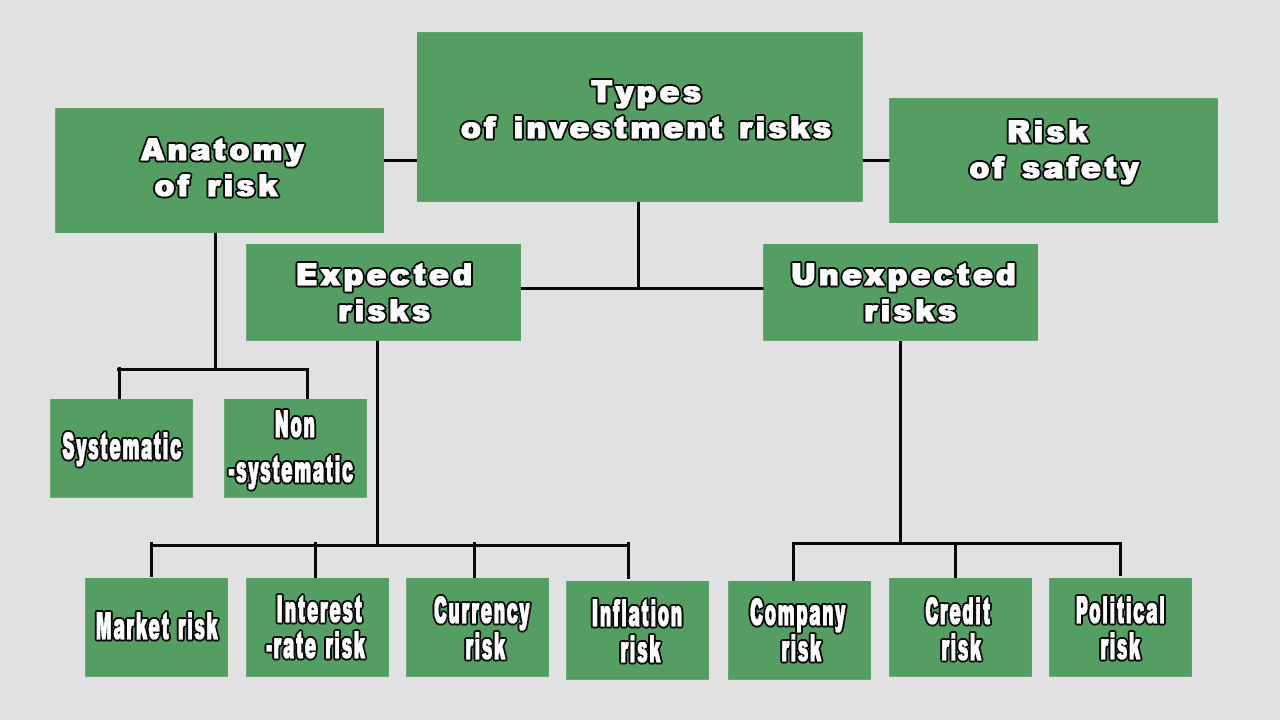 Asset allocation helps protect you against what are called systematic, or predictable, risks. One example is the recurring pattern that a period of stock market gains is always followed by a period of losses. If you always hold bonds and cash as well as stock, you reduce the risk of loss when stocks slide.

Diversification, on the other hand, can help insulate you from nonsystematic, or security-specific, risks. For example, you may select a highly rated bond for your portfolio. But bonds can be downgraded for a variety of reasons, which usually means their market value drops. What’s unlikely in a diversified bond portfolio, though, is that all your holdings would be downgraded at the same time.

Coping with the expected investment risks

While there are no guarantees that history will repeat itself, there are some investment risks you should fully expect to encounter:

Market risk refers to the recurring pattern of ups and downs in the securities markets. Many factors—economic, political, and sometimes emotional— can drive prices up or down. When the value of a market or asset class drops, most of the individual investments in that market or class suffer losses as well.

Interest-rate risk occurs because bond prices tend to move in the opposite direction from interest rates. If rates go up, the market prices of existing bonds go down. That means you could lose principal if you sold, just as you would if you sold stocks when their prices dropped.

Currency risk affects you if you have international investments. As the exchange rate between the US dollar and the currencies in which your investments are sold fluctuate, the value of your return on those investments reflects that change.

And don’t underestimate inflation risk. The cost of things goes up over time, reducing your buying power. If your return is less than the rate of inflation, you lose.

Prepare for the unexpected

No matter how carefully you select the investments for your portfolio, there are always things that take you and other investors by surprise.

Company risk is the possibility that a once-powerful company will falter. A competitor could produce a better product, the management could make a series of bad decisions, or scandal could taint its reputation. In such cases, investors tend to sell and the stock or bond price falls. 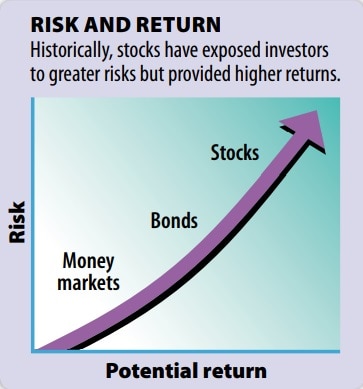 Credit risk is the possibility that a bond issuer won’t be able to make regular interest payments or repay your principal when the security matures. You face the same risk with fixed annuities.

Political risk is a factor in international investments, especially those in emerging markets where instability may undermine markets or a new regime may limit outside investment.

The risk of safety

If you’re so worried about the possibility of losing money that you put most of your money into investments you consider absolutely safe—like insured CDs and US Treasury bills—you’re investing to preserve principal. Basically, you can expect to get back what you put in, plus interest. As a long-term investment strategy, preservation of principal has its own serious risks. First, insured investments usually pay less than uninsured ones. And inflation steadily erodes your real return and your purchasing power.

When you understand the link between risk and return, you can figure out ways to take calculated risks to improve the likelihood of meeting your goals. For example, you may be willing to buy a potentially risky investment if you expect that its long-term return will be greater than the return on a risk-free investment. That’s called a risk premium. The risk-free investment you typically use as a benchmark, or standard for comparison, is the 13 week US Treasury bill, also called the 90-day bill. A T-bill is considered risk free for two reasons:

It’s issued by the federal government, which makes it virtually free of default risk, though you could lose money if you sold before its expiration date.

Its short term means it’s not vulnerable to inflation risk.

You can calculate the past risk premiums, using different formulas for specific investments. With large company stock, for example, you divide the total return, or earnings plus change in value, by the total return for T-bills. If the result is positive, taking the risk has paid off. In 64 of the 91 years from year-end 1925 through 2016, or roughly 70% of the time, large-company stocks as a group had a positive risk premium, while in the other 27 years it was negative.