What Is Federal Reserve System And Its Roles?

The Federal Reserve System is the guardian of the nation’s money. It is playing an increasingly pivotal role in managing the economy. The Federal Reserve System, well-known as the Fed, is conceivably the most powerful financial institution globally. Congress founded the central bank in 1913 to provide the country with a safe, flexible, and stable monetary and financial system.

Like other countries, the United States has a national bank to oversee its monetary policies and provide financial stability. But the Federal Reserve System isn’t one bank. Instead, it includes 12 separate district banks and 25 regional branches across the country. This way no one state, region, or business group can exert too much control.

How does the Federal Reserve work?

The Fed System has three primary components: The Board of Governors, the Federal Reserve Banks, and the Federal Open Market Committee.

The Board of Governors, located in Washington, D.C., provides the leadership for the System. Its seven governors are appointed to 14-year terms by the president and confirmed by the Senate. Their long terms are designed to insulate them from political pressure. However, the chairman serves a four-year term and is often chosen by the president to achieve specific economic goals.

The Federal Reserve Bank is composed of 12 regional banks based in Boston, New York, Philadelphia, Cleveland, Richmond, Atlanta, Chicago, St. Louis, Minneapolis, Kansas City, Dallas, and San Francisco. These 12 banks provide financial services to the commercial banks in their districts, conduct research on regional and national economies, and represent the interests of their region to the System.

The Federal Open Market Committee is responsible for formulating a policy to promote stable prices and economic growth. It oversees open market operations. Under the leadership of the Fed chairman, the Federal Open Market Committee (FOMC) meets about every six weeks. Its main task is to evaluate the state of the economy and issue what’s known as a risk statement, indicating if it thinks that either inflation or economic weakness poses a potential threat to the economy. It may also conclude the risks seem balanced. The risk statement tends to impact the stock and bond markets. It is generally interpreted as an indication of the action the FOMC is likely to take at its next meeting or the one following to tighten or loosen the money supply. 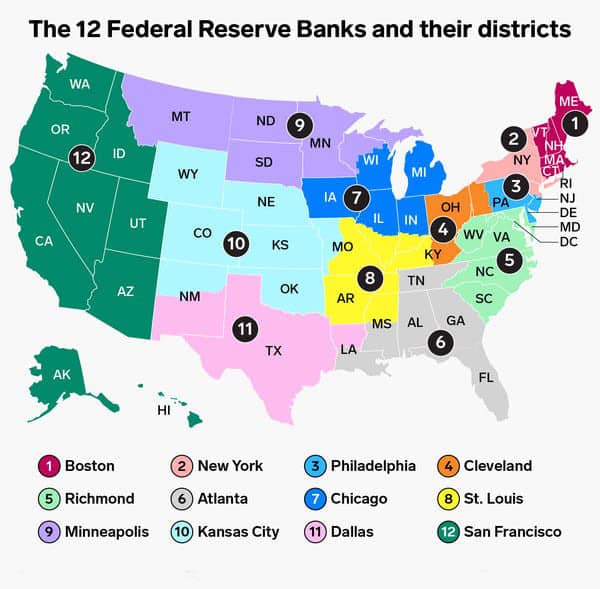 The Fed is an independent government agency funded primarily by interest on government securities it owns. It sets monetary policy under the direction of its chairman, supervises banking operations, and has become a significant factor in shaping the economy.

What are the roles of The Federal Reserve?

The Fed plays many roles and is responsible to keep the economy healthy. It handles the day-to-day banking business of the U.S. government. The Fed receives deposits of corporate taxes for unemployment, withholding, and income and federal excise taxes on liquor, tobacco, gasoline, and regulated services like phone systems. It also authorizes payment of government bills like Social Security and Medicare and interest payments on Treasury bills, notes, and bonds.

How does Fed affect you?

The Federal Reserve is responsible for monetary policy and banking system oversight. Fed works to promote a safe, efficient, and accessible system for U.S. dollar transactions.

One of the most visible Federal Reserve functions is to manage inflation. However, the Fed also promotes maximum employment and ensures that interest rates remain moderate over time. As a result, it directly affects your stock and bond mutual funds and your loan rates.

The Fed affects credit card rates. Most credit cards charge a variable interest rate based on the prime rate linked to the federal funds rate. In short, the Federal Reserve affects short-term interest rates, so it affects the rates that people pay on credit cards.

What Is Federal Reserve System And Its Roles? by Inna Rosputnia