The Role Of Banking System In Capital Markets

Banks are an integral part of the capital markets and help keep the economy fluid.

Investors help keep the capital markets healthy by investing in securities, often for the long term. But what about the capital that they may need for more immediate use?

While there are many short-term investment alternatives, people may prefer to deposit their extra cash in a bank. It’s safer than keeping money in a drawer or carrying it around, and it’s easily accessible. In addition, the money people and organizations deposit in bank accounts is the capital banks put to work.

By lending money to businesses to meet short-term financing needs, banks help keep the economy liquid. And by providing long-term mortgages, banks offer individuals the capital they seek to purchase homes. In fact, banks are such an essential source of community funding for businesses and individuals that their lending practices have sometimes been credited – or blamed – for the country’s economic health.

What is a bank and the banking system?

A bank is a financial institution that accepts deposits from the public and creates a demand deposit while simultaneously making loans.

Between the 1930s and 1999, different types of banks had different functions and operated separately. Commercial banks accepted deposits for the transaction, demand, and time accounts from their individual and business clients and made loans. Investment banks underwrote corporate debt and initial public stock offerings and advised business clients on mergers, acquisitions, and other financial issues. Finally, merchant banks served business clients, often focusing on raising capital and managing international transactions.

Since the Financial Services Modernization Act of 1999, which deregulated the banking and financial industries, some traditional differences among commercial banks, investment banks, brokerage firms, and insurance companies have been blurred, although not eliminated, especially from a regulatory perspective. Similarly, savings banks, thrift institutions (also known as savings and loan associations), and credit unions once were restricted from accepting deposits and lending money. Today they offer many of the same services as commercial banks.

The banking system is a network of institutions that provide financial services to organizations and individuals. Most developed nations have a centralized banking system and a single authority that charters, regulates, and supervises all of the country’s banks. The United States is unusual in having a dual system.

The dual banking system is credited with adding competition that promotes innovation. For example, state banks have pioneered many of the industry’s best ideas, including the checking account.

What are capital markets?

A capital market is a market where buyers and sellers are involved in trading financial securities like bonds, stocks, debentures, debt instruments, and other financial assets. Capital markets help people with ideas become entrepreneurs and help small businesses grow into big companies. It plays a crucial role in economic development. 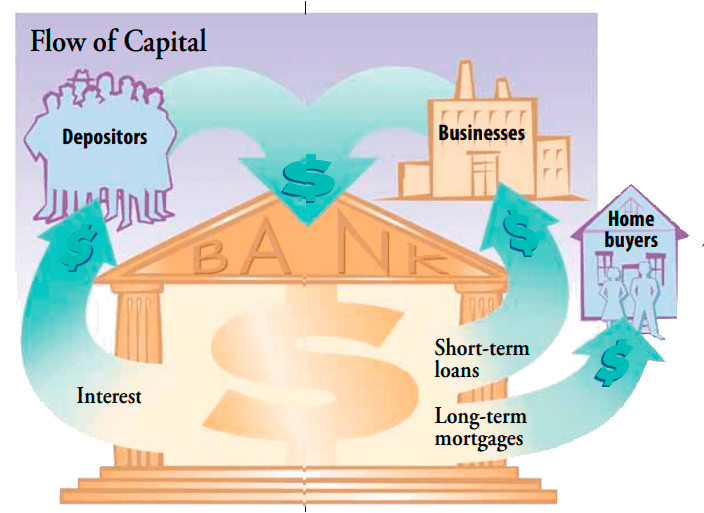 The capital market is the best source of financing for companies. Because the market mobilizes savings to finance long-term investments, it acts in linking investors and savers.

Capital markets are a platform of the exchange system that transfers capital from investors who want to use their excess capital to businesses that need the money to finance various projects or investments.

What does the bank do in capital markets?

Banks are an essential source of financing in economics all around the world. The OCC regulates and supervises the activities of national banks, their international branches, and US branches of non-US banks. Among its primary tasks are oversight of lending and investment practices – how banks put capital to work – and the directors and officers who work for the banks. The goal is to keep the banking system secure and honest and ensure that banking services are widely available.

Much of a bank’s capital comes from the money in its deposit accounts. But because customers can draw on demand deposits whenever they like, the bank must have money on hand to meet those demands. So banks don’t lend out all the money they take from deposits.

The money a bank doesn’t lend is known as its reserves. The amount a bank must hold in reserve is set by the Federal Reserve, which uses reserve requirements as one way to control the economy’s money flow. Increasing reserves is also a way to help ensure that banks can weather a financial crisis.

Banking efficiency can positively influence the development of the capital market. For example, if banks effectively assess credit quality, granting and renewing bank loans should provide positive signals to outside investors.

The inefficiency of banks can lead to the non-development of capital markets because it can repel borrowers from the market. One of the most critical roles the financial system plays – including banks – is the limitations of financial markets. It can take capital from many smaller savers, allocate it to the most critical uses, and monitor it to ensure it is used well.

It is worth mentioning that banks that operate in a system with significant capital markets can face relatively lower costs of risk absorption and can achieve reputation-signaling effects with lower capital-to-asset ratios.

Thus, banks and capital markets are rather closely interconnected and mutually beneficial. In financing the real economy, banks and markets complement each other.

Public confidence in the banking system, is built, at least in part, on the FDIC, which insures bank deposits up to $250,000 per depositor. NCUA provides similar insurance for the credit unions it regulates. Accounts registered in different ways, such as trust accounts or IRAs, are insured as separate accounts. However, securities are not insured even when you purchase them through a bank or they carry the bank’s name.

The Role Of Banking System In Capital Markets by Inna Rosputnia