How Does Government Control The Money Flow?

Keeping a modern economy running smoothly requires a pilot who’ll keep it from stalling or overaccelerating.

The United States, like most other countries, tries to control the amount of money in circulation.

Injecting or withdrawing money reflects the monetary policy that the Federal Reserve adopts to regulate the economy.

Monetary policy isn’t a fixed ideology. Instead, it’s a constant juggling act to keep enough money in the economy so that it flourishes without growing too fast.

Contents hide
1 What is meant by Monetary Policy?
2 How monetary policy works?
3 How does the Government change the supply?
4 What are the pros and cons of capital control?

Monetary policy is measures taken by governments to influence economic activity. In particular, it is done by manipulating money and credit supply and changing interest rates.

Money’s velocity is the speed at which it changes hands. If a $1 bill is used by 20 different people in a year, its velocity is 20. An increase in either the quantity of money in circulation or its velocity makes prices go up — and, when both increase, an even larger jump typically occurs, driving prices significantly higher.

Monetary policy is a set of actions that the Federal Reserve, the nation’s central bank, does to influence the amount of money and credit in the U.S. economy. As well, monetary policy controls the quantity of money available in an economy and the channels by which new money is supplied.

There are three Federal Reserve’s monetary policy instruments: open market operations, the discount rate, and reserve requirements. Open market operations are buying or selling government securities (usually bonds). In doing so, the Fed – or a central bank – affects the money supply and interest rates. The discount rate is the interest rate charged by Federal Reserve Banks to depository institutions on short-term loans. Finally, the third tool regards Reserve requirements, which are the portions of deposits that banks must maintain either in their vaults or on deposit at a Federal Reserve Bank.

Changes in monetary policy tend to be gradual, though it may change course over a period of months.

The Fed can initiate a shift in monetary policy by:

When the FOMC implements monetary policy, it impacts the federal funds rate, which is the rate that banks charge other banks for overnight access to the balances in their reserve accounts. As a result, changes in the rate affect other short-term interest rates almost immediately and influence long-term rates, the value of the dollar against other currencies, and stock prices.

From the FOMC’s perspective, the dilemma is that it must rely on estimates to make policy decisions and assess whether or not the policies it adopts are working. So, for example, it can’t be certain what effect a change in the federal funds rate will actually have or how soon the economy will respond.

How does the Government change the supply?

At about 11:15 a.m. every day, the New York Fed decides whether to buy or sell government securities to implement the Federal Reserve’s Federal Open Market Committee (FOMC) policy decisions. 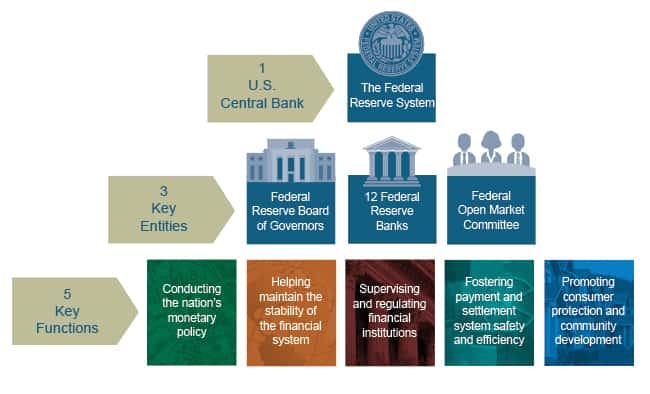 To slow down an economy where too much money is in circulation, it sells securities, taking in the cash that would otherwise be available for lending. To give the economy a shot in the arm, it creates money by buying securities. There isn’t any limit on the amount of money the Fed can make, and it can – and does – vary.

The Fed’s reserve requirement makes banks hold a percentage* of certain accounts in cash to cover any unusual demand from customers.

4. Why does government adjust the rate and create money?

The New York Fed buys government securities from banks and brokerage houses known as primary dealers to create money. The money that pays for the securities hasn’t existed before, but it has value or worth because the securities the Fed has bought are valuable.

What are the pros and cons of capital control?

Government measures to limit the flow of financial capital and assets are called capital controls. These controls include taxes, tariffs, legislation, volume restrictions, and market-based forces. Capital controls are regulations that restrict or prohibit the movement of capital across national borders. Control over capital can regulate a wide range of cross-border transactions carried out by non-residents and residents in a country.

The introduction of capital control makes the economy stable. And also help to avoid speculative ups and downs. This means that investors cannot flood the economy with funds that increase production and prices and then suddenly leave, causing a collapse.

Of course, we must mention domestic borrowing. By limiting capital outflows, domestic governments have a bigger pool of domestic savings to finance government borrowing. This reduces the cost of borrowing for private and public businesses.

Nevertheless, there are some negative points in capital control. For example, free market economists believe that capital controls prevent the flow of capital to where it is most profitable and most efficient.

How Does Government Control The Money Flow? by Inna Rosputnia