The Economic Cycles And Recession Explained

Experts work hard to predict and control the ups and downs of the economy. Economies tend to move through normally recurring cycles of growth and slowdown. But there can be problems if growth results in runaway inflation or a slowdown end in recession. The Federal Reserve works to prevent either situation. 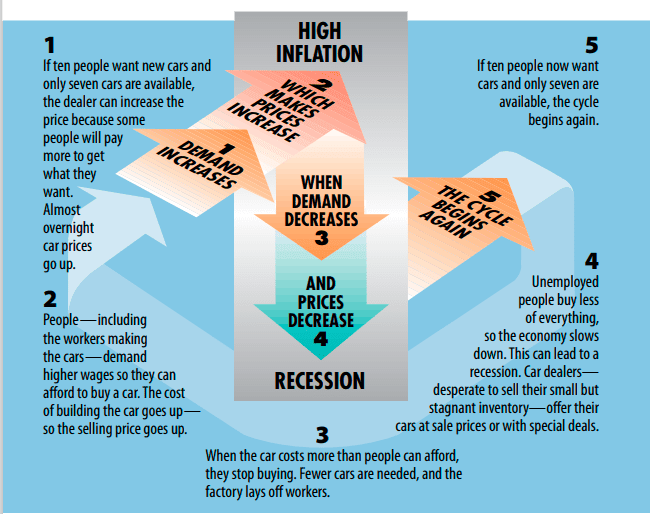 What is an economic cycle?

The Economic cycle is the natural rise and fall of economic growth over time. A cycle is a helpful tool for analyzing the economy and business performance.

Each nation’s economy goes up and down between periods of expansion and contraction. These changes are caused by levels of employment, productivity, as well as total demand for and supply of the nation’s goods and services. Supply and demand pressures influence the economy through variables such as global economic conditions, trade balances, productivity, inflation rates, interest rates, and exchange rates. In the short run, these changes lead to periods of expansion and recession. However, in the long-run, economic growth can occur that will allow a nation to increase its potential production level over time.

Since investors and businesses understand the economic cycle, they know when to make investments and when to pull their money out. Because it directly impacts everything from stocks and bonds as well as profits and corporate earnings.

In 1800, you could travel from New York to Philadelphia in about 18 hours by stagecoach. The trip cost about $4.

Today the train costs about $53, but takes 75 minutes. While the price has inflated about 1,325%, the travel time has deflated about 93%. So if time is money, today’s traveler comes out ahead.

How does the economic cycle work?

An economic cycle has four stages: expansion, peak, contraction, and trough.  An expansion is defined by increasing employment, economic growth, and upward pressure on prices.

The peak phase occurs when the economy reaches its maximum productive output. A peak is the turning point in the business cycle between an expansion and a contraction. It is usually identified by higher inflation that needs to be corrected. During the business cycle’s peak, production stops increasing and begins to decrease.

Following a peak, the economy typically enters into a correction. This stage is characterized by a contraction where the economy’s growth slows, unemployment rates rise, and inflation tapers off.

It continues until the cycle reaches a trough. The slowing ceases at the trough, and at this point, the economy has hit a bottom from which the next stage of expansion and contraction will emerge. A trough is distinguished by higher unemployment, lower availability of credit, and falling prices.

When the cycle is complete, it continues from the start again. There is no set rule for determining the duration of each phase; in fact, expansion phases can last many years before hitting a peak. But a healthy economy always goes through a contraction phase from time to time.

Most developed economies try not to let the economic cycle run unchecked because the consequences could be a major worldwide depression like the one that followed the stock market crash of 1929.

In a depression, money is so tight that the economy virtually grinds to a halt, unemployment escalates, businesses collapse, and the general mood is grim.

The people hit the hardest by inflation are those living on fixed incomes. For example, if you’re retired and have a pension determined by a salary you earned in less inflationary times, your income will buy less of what you need to live comfortably. Workers whose wages don’t keep pace with inflation can also slip their lifestyles.
But inflation isn’t bad for everyone. For example, debtors benefit because the money they repay each year is worth less than when they borrowed it and may be a smaller percentage of their budget. 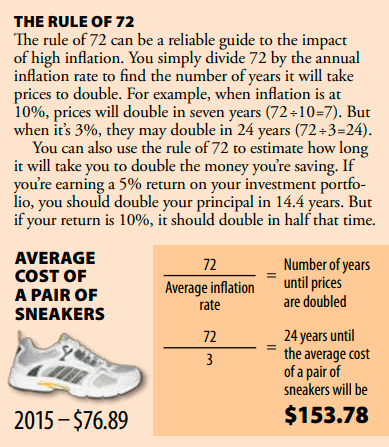 When the rate of inflation slows, it’s described as disinflation. So a 1% annual increase in the cost of living is disinflationary after a period of more rapid growth. This is because employment and output can continue to be strong, and the economy can grow.
Deflation, though, is a widespread decline in the prices of goods and services. But instead of stimulating employment and production, deflation has the potential to undermine them. As the economy contracts and people are out of work, they can’t afford to buy things, even at lower prices.

Stagflation, a confounding combination of slow economic growth and high inflation, is yet another example of how components of the standard cycle can be out of step.

Recessions are periods when unemployment rises while sales and industrial production slows. Government officials, the securities industry, investors, and policymakers all try to anticipate when they occur. However, the factors that produce economic contraction are so complex that no predictor is always reliable.

The Index of Leading Economic Indicators, released every month by the Conference Board, a business research group, provides one way to examine the economy’s overall health. Generally, three consecutive rises in the Index are considered: a sign of growth and three drops, a sign of decline, and a potential recession.

Its movement may signal economic downturns 18 months in advance, and it correctly forecasts the recessions of 1991 and 2001. But it has also pointed to recessions that never materialized and missed or were slow to anticipate others, including the one starting in 2007.

The National Bureau of Economic Research (NBER), which tracks recessions, describes the low point of a recession as a trough between two peaks – the points at which the recession began and ended. But, of course, peaks and troughs can be identified only in retrospect, though there’s a slump in the economy is evident.

Recessions may be shorter than the period of economic expansion they follow. But they can be quite severe even if they’re brief, and recovery can be slower from some recessions than others.

The more segments of the economy involved, the more serious the recession. The market collapse and credit freeze of 2008 affected many consumers and businesses for years afterward.

What is the difference between a recession and a depression?

As mentioned above, recessions are periods when unemployment rises while sales and industrial production slows. It is the period from a peak to a trough.

If the economy does not begin to expand again, then the economy may be in a state of depression.

Depressions are often identified as recessions lasting longer than three years or resulting in a drop in annual GDP of at least 10%.

A recession and a depression are periods during which the economy declines, but they differ in severity, duration, and overall impact.

A depression spans years rather than months and typically sees higher unemployment and a sharper decline in GDP. While a recession is often limited to a single country, a depression is usually severe enough to impact global trade.

The Economic Cycles And Recession Explained by Inna Rosputnia