The Role Of CFTC In Capital Markets Regulation

Derivatives differ from securities in a number of ways, including the way they’re regulated.

Futures, options on futures, and swaps are derivatives, or contracts whose changing market values reflect changes in the current value of an underlying instrument or product. For example, the market price of a futures contract for wheat is determined by the current market price of wheat, the time remaining until the contract expires, and expectations about the size and quality of the wheat crop.

Contents hide
1 What the CFTC does?
2 Inside the CFTC
3 Keeping the markets safe
3.1 Looking ahead
4 International cooperation
5 What’s a swap?

A primary goal is to protect investors from fraud, abusive practices such as attempts to manipulate prices, and the risks inherent in derivatives trading. Another is to foster open and competitive markets where trading is both efficient and transparent.

What the CFTC does?

The Commodity Exchange Act (CEA), which regulates futures trading in the United States, was passed in 1936 and has been amended regularly since then to keep pace with the evolving derivatives marketplace. Among other things, the CEA establishes the framework under which CFTC operates, though the agency itself was not created until 1974. The National Futures Association (NFA), the self-regulatory organization of the futures industry, was formed in 1981.

Certain markets that were formerly exempt from CFTC regulation, including those that permitted direct trading between institutional investors and OTC swaps markets, are no longer exempt, based on provisions of the Dodd-Frank Act of 2010.

The CTFC, an independent agency of the US government, has five commissioners appointed by the president and approved by the Senate, one of whom the president designates as chair. As is the case with the SEC, no more than three serving commissioners can belong to the same political party.

There are four CFTC divisions, eight offices, including Chief Economist, and five standing committees, including the CTFC-SEC joint advisory committee.

The Division of Clearing and Risk monitors trade clearing, clearing firms, and individuals who participate in the process and assesses derivatives market risk.

The Division of Enforcement investigates fraud, market manipulation, and other misconduct and either prosecutes or reaches settlements with violators.

The Division of Market Oversight seeks to ensure that commodities markets function smoothly and that participants comply with the law.

The Division of Swap Dealer and Intermediary Oversight supervises industry self-regulatory organizations, including NFA, as well as swap dealers and other swap market participants. 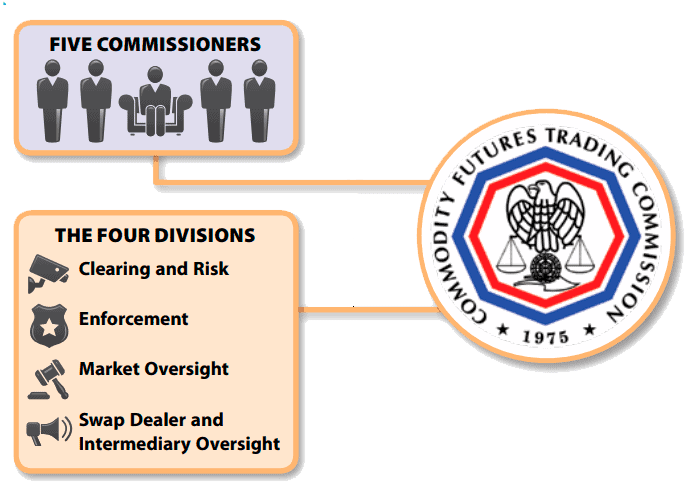 Like the SEC and state regulators, the CFTC emphasizes consumer protection, with a particular focus on preventing fraud. It encourages investors to educate themselves on how the futures markets work and urges them to investigate the registration status and disciplinary history of any firm or market participant with whom they might work using the NFA BASIC database and other regulators’ records.

The agency encourages investors to be suspicious of any offer that stresses quick returns and limited risk. One limitation may be that futures contracts don’t demand the degree of disclosure required for securities offerings, such as stocks, bonds, and mutual funds. For example, the risk disclosure documents, which CFTC regulations and NFA rules require intermediaries to provide when soliciting business — and that prospective clients must indicate they’ve seen — are generic statements about the risks of buying and selling futures contracts and what trading could cost. More comprehensive discussions are available under the Investor Information tab on the NFA website.

Market manipulation, which can have a major impact not only on futures investors but on the economy at large, is notoriously hard to prosecute. Among other issues, the legal standard requires proving intent as well as behavior. Of course, manipulation is nothing new. The first known US regulation designed to deter it dates to 1868, when cornering a market was banned.

A major challenge in regulating derivatives is that new, often extremely complex products are introduced all the time. Regulators must determine how these products work, analyze the impact they may have on the financial markets, and determine the appropriate rules that should apply to protect investors and the economy.

Major changes have occurred since 2008, as the huge and formerly unregulated swaps market has come under federal jurisdiction. Some swaps are overseen by the CFTC, some by the SEC, and some jointly.

The modern derivatives marketplace is global, and the regulatory issues that concern the CFTC similarly concern regulators around the world, though their views often differ. Among the ways agencies collaborate to develop consistent standards of oversight and enforcement is through membership in the International Organization of Securities Commissions (IOSCO), which was established in 1983. One limitation is that IOSCO has no enforcement powers.

The CFTC also works with regulators in the European Union and the United Kingdom to combat cross-border fraud and market manipulation.

A swap is a contract between two parties, called counterparties, in which they agree to exchange one or more payments whose value is determined by changes in the level of one or more of the financial instruments specified in the contract, such as currency exchange rates, interest rates, or commodity prices.

The objective of any swap contract is to transfer risk from one party to another that seeks to profit from the endeavor.

In an interest rate swap, for example, two companies agree to exchange interest payments for a specific period on a fixed amount of money, called the notional amount. One company receives a fixed rate, such as 4%, while the other receives a floating, or variable, rate. Typically the floating rate is calculated using a publicly available index plus a margin, such as 1%. As the index changes, the second company’s interest income changes too. The company receiving the fixed rate has reduced its risk because it knows how much income it will have.

The Role Of CFTC In Capital Markets Regulation by Inna Rosputnia