October Stock Market Crashes In US. History Repeats Itself?

In turn, these events have helped to give the month a bad reputation with investors. Referred to as the “October Effect”, there is a widespread belief that stocks tend to decline during the month, although the actual statistics don’t support the theory. But it’s a good excuse to take a look at some of those historical market crashes as they all provide unique lessons that are best not forgotten.

Bankers’ Panic 1907 or the Knickerbocker Crisis

Panic of 1907: Also known as the 1907 Bankers’ Panic and the Knickerbocker Crisis, the Panic of 1907 was a financial crisis that took place over a three-week period starting in mid-October, when the New York Stock Exchange fell almost 50% from its peak the previous year. The panic was triggered by the failed attempt in October 1907 to corner the market on stock of the United Copper Company.

When this bid failed, banks that had lent money to the cornering scheme suffered runs that later spread to affiliated banks and trusts, leading a week later to the downfall of the Knickerbocker Trust Company — New York City’s third-largest trust. The collapse of the Knickerbocker spread fear throughout the city’s trusts as regional banks withdrew reserves from New York City banks.

Panic extended across the nation as vast numbers of people withdrew deposits from their regional banks. It was ultimately quelled when the federal government provided over $30 million in aid, and leading financiers like J.P. Morgan and John D. Rockefeller continued orchestrating deals to bring confidence and liquidity back to the financial markets. The panic’s impact led to the eventual development of the Federal Reserve System.

Black Thursday is the name given to Thursday, October 24, 1929, when panicked investors sent the Dow Jones Industrial Average plunging 11 percent at the open in very heavy volume. Black Thursday began the Wall Street crash of 1929, which lasted until October 29, 1929, known as Black Tuesday.

Many investors had borrowed or leveraged heavily to buy stocks, and the crash on Black Thursday wiped them out financially–leading to widespread bank failures. As people realized that banks had used their savings to invest on Wall Street, they rushed to take out their deposits. Banks closed over the weekend, and then only gave out 10 cents on the dollar. Black Monday refers to October 28, which saw stocks fall another 13%.

Black Tuesday marked another sharp fall in the stock market. The DJIA fell 12%, one of the largest one-day drops in stock market history. More than 16 million shares were traded in the panic sell-off, which effectively ended the Roaring ’20s and led the global economy into the Great Depression. 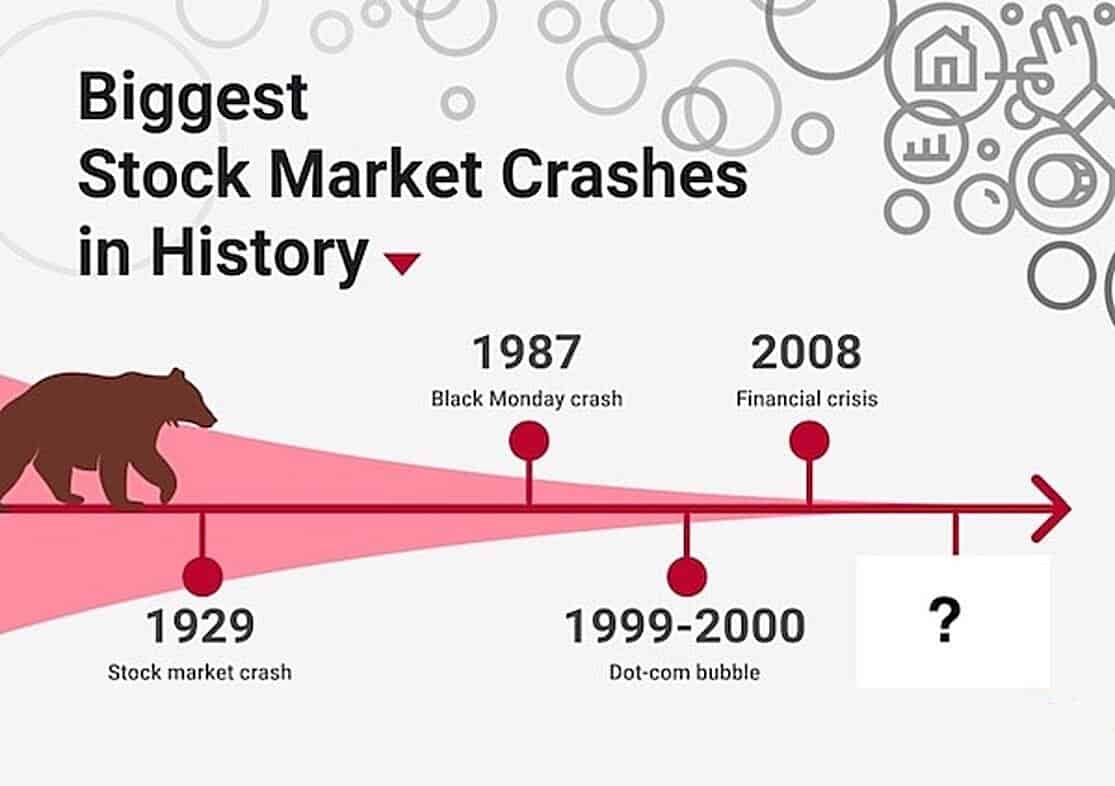 The market hit a 20th-century low of 41.22 on July 8, 1932, which was a fall of -89% from its high of 381.17 on Sept. 3, 1929. During this time, unemployment rose to double digits as industries laid off workers they had hired during the boom years. It was only after President Franklin Delano Roosevelt was elected that the economy showed signs of taking a turn towards the better. Among his achievements is stopping the Smoot-Hawley tariffs and establishing the Reciprocal Trade Agreement Act in 1934. Still, a new high wasn’t reached until Nov. 23, 1954.

A popular explanation for the 1987 crash was computerized stock selling programs. Computerized trading was still relatively new to Wall Street. These computer programs automatically began to liquidate stocks as certain loss targets were hit, pushing prices lower and creating a domino effect as the falling markets triggered more stop-loss orders. Since the same programs also automatically turned off all buying, bids vanished all around the stock market at basically the same time. 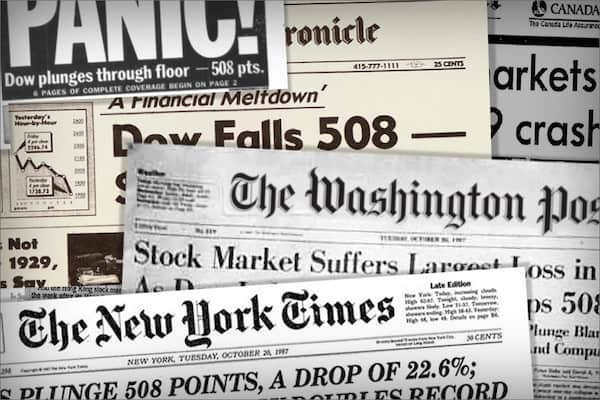 Another theory about the cause of the crash comes from a Securities and Exchange Commission study that concluded that it was traders’ fears over the impact of anti-takeover legislation that was moving through the House Ways and Means Committee. The bill aimed to eliminate the tax deduction for loans used to finance corporate takeovers. Ironically, the tax deduction provision was stripped from the bill before it became law. Another contributing factor was an announcement on October 16 by Treasury Secretary James Baker that the United States might let the value of the dollar fall. Baker thought that a lower dollar would help reduce the alarming rise in the U.S. trade deficit.

Many feared the crash would cause a recession. But the Federal Reserve started pumping money into banks. As a result, the market stabilized. By the end of October, the Dow had already risen 15% higher. It spent the rest of the year in a narrow trading range, between 1,776 and 2,014.

It was a precursor to the 1989 Savings and Loan Crisis and the 1990-1991 recession. After Black Monday, regulators overhauled trade-clearing protocols to bring uniformity to all prominent market products. They also developed new rules, known as “trading curbs” or colloquially as circuit breakers, allowing exchanges to temporarily halt trading in instances of exceptionally large price declines in some indexes. 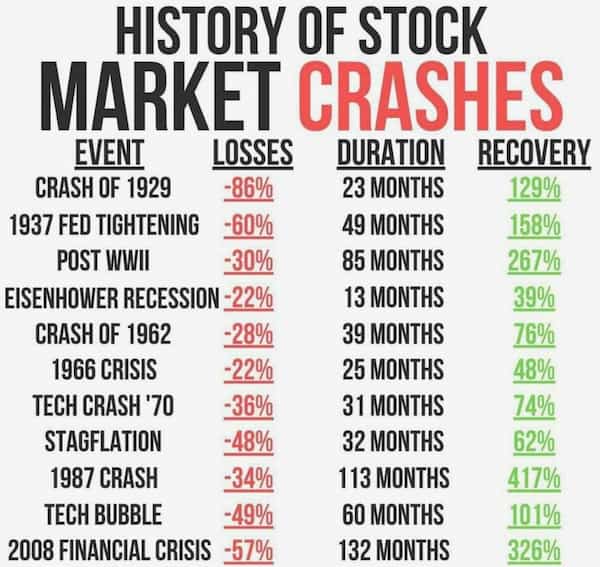 The Tech or Dot.Com Bubble

Between 1995 and its peak in March 2000, the Nasdaq Composite stock market index rose +400%, only to fall 78% from its peak by October 2002, and ultimately giving up all its gains during the bubble. During the crash, many online shopping companies, such as Pets.com, Webvan, and Boo.com, as well as several communication companies, such as Worldcom, NorthPoint Communications, and Global Crossing, failed and shut down. Some companies, such as Cisco, whose stock declined by -86%, Amazon.com, and Qualcomm, lost a large portion of their market capitalization but survived.

The tech bubble can be traced back to the 1993 release of Mosaic and subsequent web browsers during the following years gave computer users access to the World Wide Web, popularizing use of the Internet. Internet use increased as a result of the reduction of the “digital divide” and advances in connectivity, uses of the Internet, and computer education. Between 1990 and 1997, the percentage of households in the United States owning computers increased from 15% to 35% as computer ownership progressed from a luxury to a necessity. This marked the shift to the Information Age, an economy based on information technology, and many new companies were founded.

At the same time, a decline in interest rates increased the availability of capital. The Taxpayer Relief Act of 1997, which lowered the top marginal capital gains tax in the United States, also made people more willing to make more speculative investments. At the same time, The Telecommunications Act of 1996 was expected to result in many new technologies from which many people wanted to profit. As a result of these factors, many investors were eager to invest, at any valuation, in any dot-com company, especially if it had one of the Internet-related prefixes or a “.com” suffix in its name. Venture capital was easy to raise. Investment banks, which profited significantly from initial public offerings (IPO), fueled speculation and encouraged investment in technology.

Between 1995 and 2000, the Nasdaq Composite stock market index rose 400%. It reached a price–earnings ratio of 200, dwarfing the peak price-earnings ratio of 80 for the Japanese Nikkei 225 during the Japanese asset price bubble of 1991. In 1999, shares of Qualcomm rose in value by +2,619%, 12 other large-cap stocks each rose over +1,000% in value, and seven additional large-cap stocks each rose over +900% in value. An unprecedented amount of personal investing occurred during the boom and stories of people quitting their jobs to trade on the financial market were common. The news media took advantage of the public’s desire to invest in the stock market. 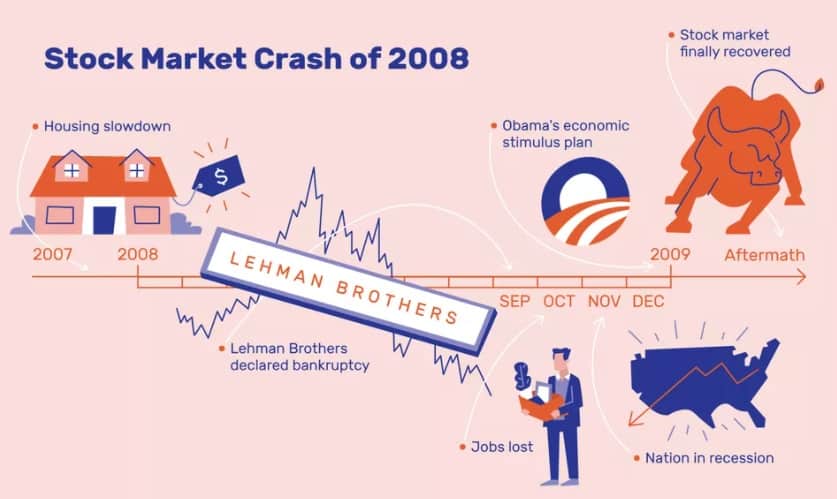 In 2000, Alan Greenspan, then Chair of the Federal Reserve, raised interest rates several times; these actions were believed by many to have caused the bursting of the dot-com bubble. On Friday, March 10, 2000, the NASDAQ Composite stock market index peaked at 5,048.62. On March 20, 2000, Barron’s featured a cover article titled “Burning Up; Warning: Internet companies are running out of cash—fast”, which predicted the imminent bankruptcy of many Internet companies. I should note, the Enron scandal was revealed in October 2001. By the end of it all in mid-October 2002, the stock market had lost -$5 trillion in market capitalization and the NASDAQ-100 had dropped -78% from its peak.

The government’s response to the subprime crisis started in earnest after Lehman’s failure in mid-September 2008. On Wednesday, October 8, the European Central Bank, Bank of England, Federal Reserve, Bank of Canada, Swedish Riksbank and Swiss National Bank all announced simultaneous cuts of 0.5% to their base rates.

Shortly afterward, the Central Bank of the People’s Republic of China also cut interest rates. On October 8 there were sharp losses on stock markets worldwide with a loss of over 9% in Japan. Trading was suspended in Russia and Indonesia after steep morning losses. In the United States, following the funds cut by the Federal Reserve, stocks were extremely volatile.

On October 8 the Federal Reserve loaned AIG $37.8 billion, in addition to the previous loan of $85 billion. On Thursday, October 9, the one-year anniversary of the Dow’s peak, the cost of short-term. credit rose while there were heavy losses in the United States stock market; the Dow dropped below 8600, reaching a five-year low. It was the first time since August 2003 that the Dow closed below 9000. The following day Treasury secretary Henry M. Paulson met in Washington with world financial leaders. A meeting of international financial leaders hosted by President Bush at the White House in Washington is planned on Saturday to attempt to coordinate the global response to the financial crisis.

On October 10, within the first five minutes of the trading session on Wall Street, the Dow Jones Industrial Average plunged 697 points, falling below 7900 to its lowest level since March 17, 2003. Later in the afternoon, the Dow made violent swings back and forth across the breakeven line, toppling as much as 600 points and rising 322 points.

October Stock Market Crashes In US. History Repeats Itself?