Risk avoiders and risk takers can both benefit from their interaction in the futures markets.

Hedgers are producers or purchasers of commodities. They use futures contracts as tools to help manage the financial risks of their business operations. In general, producers like wheat farmers sell contracts while users like baking companies buy contracts.

Contents hide
1 How hedgers use the market?
2 The role of speculators
2.1 Speculators are indispensable
3 Influences on futures contract prices
4 Options on futures
5 Examples of hedgers, users and speculators positions
6 Rice tickets

Speculators, on the other hand, trade futures strictly to make money.

They choose contracts based on what they expect to happen. The positions they take have the potential to move prices up or down, sometimes significantly, especially if there is a sudden flurry of buying and selling that may be sparked by rumor, inside information, or other factors.

How hedgers use the market?

Hedgers are interested in protecting themselves against price changes that will undercut their profit. For example, a textile company may want to hedge against rising cotton prices as a result of disease or bad weather. In August, the company buys 100 December cotton futures, representing five million pounds of cotton at 58 cents a pound.

During the fall, the cotton crop is damaged and the prices shoot up. The December contract now trades at 68 cents. But the textile maker has hedged against exactly this situation. In December it can take delivery of cotton at 58 cents a pound, 10 cents less than the market price, and save $500,000 (10 cents x 5 million pounds).

Or, more likely, the company will sell the futures contracts for more than it paid to buy and use the profit to offset the higher price it will have to pay for cotton in the cash market. If the hedge works perfectly, hedgers make up in one market what they lose in the other. Realistically, of course, the perfect hedge seldom exists.

Investing in futures is different from investing in stocks, bonds, and mutual funds because futures markets are zero sum markets. That means for every dollar somebody makes (before commissions), somebody else loses a dollar. Put bluntly, that means that any gain is at somebody else’s expense.

The role of speculators

Speculators hope to make money in the futures market by betting on price moves. A speculator may load up on orange juice futures in November, for instance, betting that if a freeze damages the Florida orange crop, the price of orange juice and the futures contracts based on it will soar.

If the speculators are right, and the winter is tough, the contracts on orange juice will be worth more than they paid. The speculators can then sell their contracts at a profit. If they’re wrong, and there’s a bumper crop, the bottom will fall out of the market, and the speculators will be squeezed dry by falling prices.

Speculators are crucial to the success of the futures market because they complete a symbiotic relationship between those wishing to avoid risk and those willing to take it.

Since hedgers, in planning ahead, want to avoid risk in what are often undeniably risky businesses, others have to be willing to accept it. Unless some speculators are willing to bet that orange juice prices will rise while others bet that prices will fall, an orange juice producer could not protect against dramatically increased costs in the event of a freeze, and orange farmers couldn’t earn enough money in a good year to pay their production costs. 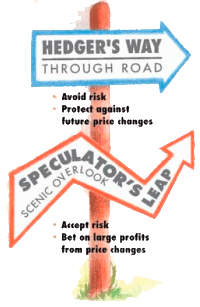 Speculators also provide liquidity. If only those who produced or used the commodities were trading, there would not be enough activity to keep the market going. Buy and sell orders would be paired slowly, erasing the protection that hedgers get when the market responds quickly to changes in the cash market.

The price of a futures contract is influenced by natural and political events, but it’s also affected by the economic news that the government releases, the length of time the contract has to run, and by what speculators are doing and saying.

Virtually every day of every month, the government releases economic data, sells Treasury bills, or creates new policies that influence the price of futures contracts for both natural and financial commodities. News on new home sales, for example, directly influences the price of lumber futures, as hedgers and speculators try to link the probable rise or fall in the demand for lumber to what will happen in the construction industry.

If a producer holds a commodity for future delivery, the contract will reflect storage, insurance, and other carrying costs to cover daily expenses until delivery. Generally, the further away the delivery date, the higher the contract price.

In an inverted market, where there’s a limited short-term supply of a particular commodity, hoarding may increase the price of the near-term contracts while reducing the prices for farther-out contracts. This is called backwardation.

Though they have different goals, hedgers and speculators are in the market together. What happens to the price of a contract affects them all.

Buying a put option on a futures contract gives the buyer the right to sell. An options buyer isn’t obligated to exercise, but may do so before expiration if it’s an American style option.

If the price of gold falls, then the buyer lets the option expire unexercised and loses only the price of the option premium. By using the options alternative, the buyer is protected against the unlimited losses that are possible with futures contracts.

In December, the price of gold in the cash market — what a buyer would pay for immediate delivery — is $15 less than the price of the June contract.

Speculators buy gold futures contracts if they think the price is going up.

The producers can’t sell their gold because it isn’t ready yet. They do nothing.

This upswing in the cash price is exactly what the users were trying to protect themselves against. They wait for the expiration date.

The speculators sell, thinking gold has reached its peak. One clue is that the contract price is so close to the cash price. If speculators thought higher prices in the cash market were likely in the near future, they would be willing to pay higher prices for futures contracts.

This time the speculators made money in the market if they sold in March when the contract price reached its peak.

Contracts expire when gold is $1,250 an ounce in the cash market and $1,252 in the futures market

In June, when the contract expires, both the producers and the users equalize their profit or loss in the futures market through offsetting trades in the cash market

Because the price of the gold futures contract had dropped, the producers made money on the offsetting trade.

Even though producers had to sell their gold in the cash market for less than the anticipated price, the profit from their futures trades gave them the expected level of profit.

The users lost money on the futures contracts because it cost more to sell the offsetting contracts than they had paid to buy.

Since it cost the users less to buy gold in the cash market than they had expected, the total cost was what they anticipated.

The oldest futures contracts date back to 17th-century Japan, when rice tickets provided landlords who collected rents in rice with a steady secondary income source. They sold warehouse receipts for their stored rice, giving the holder the right to a specific quantity of rice, of a specific quality, on a specific date in the future.

The buyers who paid for the tickets could cash them in at the appointed time or sell them at a profit to someone else. Like futures contracts today, the tickets themselves had no real worth, but they represented a way to make money on the changing value of the underlying commodity — the rice.