Taxes In Retirement – How Much Will You Pay?

Income taxes, like weeds, can be hard to get under control.

Despite the major changes that retirement is likely to bring, you won’t be able to escape taxes entirely if you have income from a job, a pension, investments, or Social Security. The irony, of course, is that if you owe tax, it means you have a larger income and so may actually be more financially secure. There are some tax breaks, though, after retirement.

When you stop working, you stop paying taxes for Social Security and Medicare. That can add several thousand dollars to your bottom line. If you earn a pension in one state but move to another, you don’t have to pay taxes on the pension income to the state where you earned it. (But you will be a taxpayer in the state where you live.) When you reach 65, you may also qualify for a larger standard deduction when you file your federal tax return.

Most retirement income is taxed, based on the type of income it is. Here’s an overview of federal rules that apply:

Annuity income: A portion of each annuity payment is considered a return of principal and is not taxed unless it was purchased with pretax dollars. Earnings are taxed at your regular rate.

Capital gains: Profits from the sale of stock, mutual funds, your home, and many other equity investments are taxed at your long-term capital gains rate, provided you have held the investments for the required period.

Interest income is taxed at your regular rate. Dividends from qualifying stocks and mutual fund distributions of those dividends are taxed at your long-term capital gains rate.

IRA distributions: All earnings in a traditional IRA and any contribution for which you took a tax deduction are taxed at your regular rate when you withdraw the money. Withdrawals of nondeductible contributions you made are not subject to tax. Additionally, income from a Roth IRA is not taxed if you are at least 59½ and your account has been open five years or more.

Lump sum distributions from pensions, 401(k)s, and other salary-reduction plans are taxed at your regular rate.

Pension annuity income is taxed at your regular rate.

Rollovers from pensions, 401(k)s, and other salary reduction plans remain tax-deferred until you make withdrawals.

The amount of tax you owe on your regular income depends on your filing status, the rates at which various levels and types of income are taxed, and the tax bracket you’re in.

A tax rate is the percentage of tax paid on a certain level of income. There are seven US rates, and you pay the lowest rate on a base amount of income and then at increasingly higher rates each time your income passes another cut-off, or level. Those levels, or plateaus of income known as tax brackets, are set each year to reflect inflation.

Your marginal tax rate is the highest rate at which you pay tax on any of your taxable income. In the example above, you’d be in the 25% bracket. Most people expect to be in a lower bracket after they retire because they expect their taxable income to be less.

As income tax rates have increased, the amount that’s exempt from federal estate tax has been increased. That may be welcome news if you have substantial wealth, as estate taxes are figured on the value of any assets that, at the time of your death, exceed the exempt amount.

While the amount that’s exempt from tax changes from time to time, and you can’t predict what the law will be at the time you die, you can use a well-designed estate plan to provide as generously as possible for your heirs. It’s wise to consult an experienced professional to be sure you’ll achieve this goal.

You should be able to avoid taxes that are imposed as penalties, though it’s your job to comply with the regulations. Withdrawals from retirement plans before you reach age 59½ may be subject to a 10% penalty in addition to income tax you owe.

You can withdraw certain amounts from IRAs without penalty to pay medical and higher education bills and up to $10,000 to buy a first home. You can borrow from some retirement plans without penalty, as long as you pay the amount back within five years. But if you don’t repay, you may face the 10% penalty as well as the taxes due. There’s a 50% penalty due each year on any amount you should withdraw from your traditional IRA but fail to take after you turn 70½. There’s also a 6% annual penalty for excess IRA contributions in your account.

You might also owe a penalty if you do an indirect IRA rollover from a qualified plan. The plan will withhold 20% of the total toward your tax bill. If you deposit the total amount including the 20% into an IRA, you can reclaim the 20% when you file your income tax return for the year. The problem is that you must put the total amount — including the 20% you didn’t get — into the IRA. If you don’t deposit it all, even if it’s because you don’t have the money, the 20% is considered a withdrawal, so tax is due and potentially a 10% early withdrawal penalty. You can avoid the problem by doing a direct rollover. 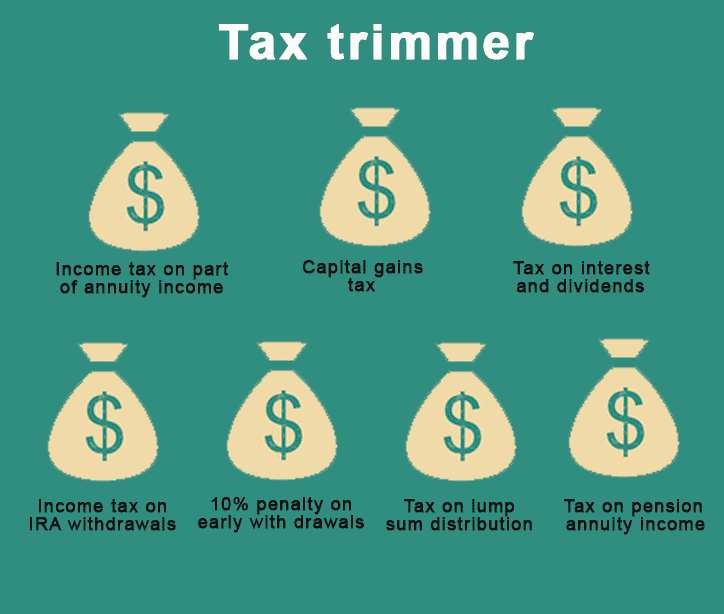 Some income is tax free

Just as you can minimize the tax you owe by choosing the way you take income, you can avoid tax altogether by making tax-exempt investments — though you may be vulnerable to the alternative minimum tax (AMT).

You owe no federal tax on interest you earn on certain municipal bonds sold by state and local governments (and no state tax if you live in the state where the bond is issued). There’s no state or local tax on interest you earn on US Treasury bonds, notes, and bills. And if you wait to take money from a Roth IRA until you’re older than 59½ and the account has been open at least five years, you’ll owe no income tax on the amount you withdraw.

While you probably won’t be able to produce all the income you need from these sources — there are limits on what you can contribute to a Roth IRA and interest income is vulnerable to inflation — they can leave you with more income by eliminating taxes.

Taxes In Retirement – How Much Will You Pay? by Inna Rosputnia