How Do Employer Retirement Plans Work?

When you’re mapping out the best route to collecting retirement income, there’ll be several forks in the road.

If you’ll have a pension or you’ve participated in a retirement savings plan where you work, and income from that source is a mainstay of your budget, the ideal solution is having your first retirement payment arrive the month after you receive your last paycheck. That requires making arrangements in advance.

On the other hand, you may not need the money right away. Then your goal is figuring out the best way to continue to take advantage of the potential for tax-deferred growth. Most plans offer a number of alternatives, and it’s smart to investigate what they are.

While you don’t have to decide until you’re actually ready to stop working, making the best choice is critical. The factors you have to consider are your age and health, what you want to provide for your family, and what other sources of income you’ll have.

For example, if you’re in poor health and concerned about providing for your spouse, you might choose a joint and survivor pension annuity that will continue to pay while either of you is alive. On the other hand, if your spouse has a good pension from his or her employer or is seriously ill, you might choose a single life annuity that will provide a larger amount for you each month than a joint annuity would. In many cases, this option requires your spouse’s written, notarized consent.

Or, if it’s your employer’s financial health you’re concerned about, you may decide to take your money out of the plan and invest it elsewhere.

When you retire from an organization that provides a traditional pension, you generally have two income choices: a pension annuity or a lump sum distribution.

With an annuity, you receive income each month for the rest of your life or your life and the life of another person, usually but not necessarily your spouse. At the time you retire, your employer calculates the amount you’ll receive based on a number of factors including your age, your final salary, and the number of years you’ve worked for the organization. Income taxes are withheld from each check. If you choose a lump sum, your employer calculates the amount you’ll receive and transfers the money to an account you designate. If it’s a cash account, income taxes are withheld, whether or not you plan to move the money into an IRA. If you roll over the amount directly to a tax-deferred IRA, income taxes are not due until you withdraw from that account.

Before the 1870s, retiring workers had to plan to live on their savings or depend on family. In 1875, American Express offered the first private pension plan in the US to employees over 60 who had been with the company for at least 20 years. 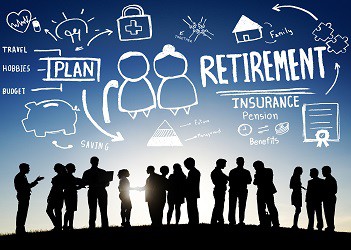 They always include (1) leaving your money in the plan, where you may be able to convert it to a pension annuity or take systematic withdrawals, (2) rolling over to an IRA, or (3) taking a lump sum.

What you receive depends on how much was invested, how long it was invested, and how the investments performed. Generally the assets that have accumulated are sold at the time you choose an income option and the value becomes the principal that’s used to purchase an annuity contract, transferred to an IRA, or paid out as a lump sum.

You’re likely to be more confident about making pension decisions if you work with an experienced professional who can answer your questions and help you analyze different routes to your goals. Since many of these choices are irrevocable, you’ll want to weigh the alternatives carefully.

Your employer may have specialists on staff who know the ins and outs of your plan and how other employees have handled the decisions you’re facing. You might ask your other professional advisers for a referral. But don’t feel you have to rush into working with someone. You’ll want to check their professional credentials and resolve to your own satisfaction that the advice you’re being given is both knowledgeable and impartial.

Before you can begin taking income or roll over your assets, your account has to be valued to determine what it is worth. Every plan values accounts on a regular schedule, but no plan does a separate valuation for account holders who want to move their money or begin distributions. In addition, a 401(k) or similar plan has the right to hold your money for up to 60 days after valuation. Not every plan does, but that could be the case.

How Do Employer Retirement Plans Work? by Inna Rosputnia