Investing conservatively may not be as smart as it seems.

Stable value funds and guaranteed income contracts (GICs) are designed to preserve capital, which means reducing the risk that your investment will lose money. For example, if you put $10,000 into a capital preservation fund, you should reasonably be able to expect that the value of that fund will never be less than $10,000. The downside is that a capital preservation account is less likely to provide long-term protection against inflation.

A stable value fund guarantees the value of your initial investment, or principal, and promises a fixed rate of return.

A stable value fund may buy US Treasury and corporate bonds as well as interest-bearing contracts from banks and insurance companies. Or all of the fund’s assets may go into GICs.

The sponsor, typically an insurance company, establishes the value of the fixed-income investments at the time of purchase, arriving at what’s known as book value. After valuation, the net asset value of the fund and the price of each share remain constant, unrelated to the changing market value of the fund’s holdings.

Stable value funds pay interest at a higher rate than money market mutual funds, providing a stronger hedge against inflation. That’s because the fund’s investments have longer maturity dates than the investments made by money market funds, and pay higher interest. The higher rates are one reason some experts recommend stable value funds for investors who want to diversify a 401(k) account that contains more volatile investments, such as stock mutual funds or international funds.

However, the interest rate on a stable value fund is generally guaranteed for only a predetermined time, sometimes as brief as three months, and varies with changing market conditions. In some plans, you may have to pay a fee, sometimes a substantial one, for shifting money out of a stable value account.

Investors concerned about losing their principal by buying securities that they consider too risky may choose to put some of their retirement plan savings into guaranteed investment contracts (GICs).

These contracts are insurance company products that resemble individual bonds (not bond funds) or bank certificates of deposit (CDs). The issuer has the use of your money for the term of the contract, and pays a fixed rate of interest in return. At the end of the specified term, often one year but sometimes as long as five years, you get back your principal plus interest. You can use that lump sum to buy another contract paying the current interest rate or invest your money elsewhere.

The principal and earnings of a stable value fund are guaranteed by the insurance company sponsoring the fund. The guarantee is as good as the company’s ability to meet its financial obligations.

While GICs are often described as safe investments, they actually pose a number of risks. The major problem is that the return on a GIC is unlikely to outpace inflation over the long term, leaving you short of the income you need in retirement In addition, you can face substantial penalties for switching money out of a GIC, including forfeiting a percentage of your principal. That’s because GIC assets are themselves invested in fixed-income investments that provide a higher rate of return than the insurer guarantees you. If the insurer has to sell those investments to redeem your principal, it puts the insurer’s profit at risk — a loss that’s passed along to you.

You should also be aware that if you put money in a GIC and the insurer goes out of business, you may receive a lower interest rate than you were promised. And it may also take longer than expected to get your principal back.

However, you can evaluate the issuer’s economic strength and its ability to meet its obligations by checking the company’s credit rating before you purchase a GIC. Those ratings are available online from Standard & Poor’s, and Moody’s Investors Service. You can also ask your plan administrator for this information.

Money market funds are also designed to preserve principal by investing in cash equivalents, or short-term debts of corporations, banks, and the US government. These funds try to keep the value of each share at $1. 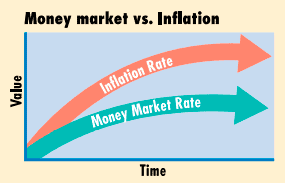 For example, a money market fund might buy 13-week US Treasury bills or commercial paper, which is a corporate loan with a maturity as short as a few days or as long as a few months. Since the terms are short, there’s little danger that interest rates will change significantly. But money market funds aren’t federally insured and could lose value.

Money market funds have their good points. You earn interest, typically at about the same rate than you would get on an insured bank account. And, you can usually move money in and out of the fund without penalty or loss of value. On the other hand, since the interest rate is unlikely to be significantly greater than the rate of inflation, and may be substantially lower, you won’t earn enough over time to keep up with the increasing cost of living.

When you own a money market fund outside a 401(k), it can play an important role in managing your money, since you can use it as a parking place for cash you’re planning to invest elsewhere. But since you can allocate your 401(k) contributions to various investments as you add money to your account, a money market fund may serve little purpose during the time you’re building your account.