Variable income means the amount of your payments will change to reflect investment performance.

The point of choosing variable income when you annuitize your contract is the potential for the income to increase over time. Such increases are dependent on growth in the value of the underlying investments in the annuity funds you’ve selected. For example, if you’ve invested primarily in equity funds and the stock market gains value, your account should gain value.

Of course, growth isn’t guaranteed. So your income could be less in one year than it was the year before if investment markets lost value or the funds you chose didn’t provide a strong return.

Contents hide
1. The air factor
2. Finding the initial payment
3. In the balance
4. How variable income works?

Whether or not you realize an increase in income in any year also depends on another factor: the contract’s assumed interest rate, or AIR. The AIR is a benchmark against which the annual return on your annuity funds, minus expenses, is measured. If the net return is equal to the AIR or exceeds it, the return will translate into higher income. But if the net return is less than the AIR, your income will decrease.

In some contracts, the AIR is set by the annuity issuer and in others you may have a choice of two rates that vary by one and a half to three percentage points, such as 3.5% and 5% or 3% and 6%. If you choose the lower rate, your initial income payment will be lower than it would have been with the higher rate. But the performance of your investment funds can meet or exceed the benchmark more easily than if the AIR were higher.

Once the benchmark has been set, you can compute the minimum amount you’ll receive in your first payment by using the tables included in your contract. There’s a different table for each of the AIRs and payment options the contract offers. 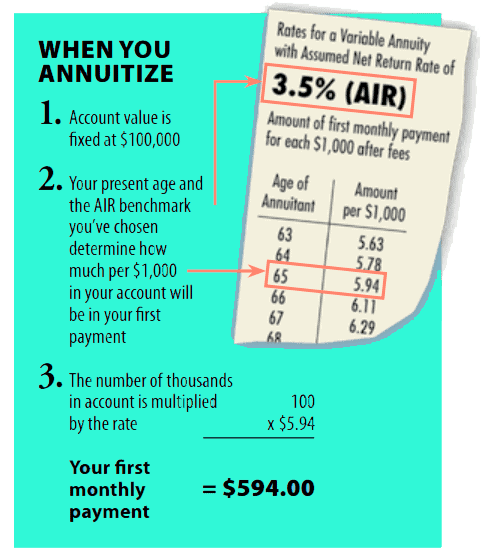 Variable annuities are complex products, and the process involved in determining the ups and downs of variable income can be particularly confusing.

But investors are typically attracted by their potential, based on past performance, to offset the impact of inflation during retirement, although that’s no guarantee of future results.

Once the amount you’re receiving increases, any decreases in value are based on the most recent payments, not the amount of your first payment. For example, if over several years the amount you received increased from $267 to $400 and then values declined for a time, your payments might go down to $350 or even less. It is less likely, based on historical figures, that your payment amount will drop below $267, though in a serious downturn, or in a downturn occurring soon after your income stream began, it could.

When the value of an annuity unit in your account goes up, your monthly payment increases. When the value decreases, the amount goes down for that period, but can go up again.

Finally, the company multiplies the new unit value times the number of annuity units to arrive at the amount of your payment. In this example, the new monthly payment would be $631.42 (59.4 x $10.63 = $631.42). Of course, the amount could go down as well as up in any given period.