The bottom line on mutual fund performance is measured by return and yield over several time periods. Whether a mutual fund aims for current income, long-term growth, or a combination of the two, you’ll want to track its performance to judge whether or not it is profitable.

You can evaluate a fund by:

You can compare a fund’s performance to similar funds offered by different companies, or you can evaluate the fund in relation to other ways the money could have been invested — individual stocks or bonds, for example.

Because return and yield are figured differently for each type of investment, there isn’t a simple formula for comparing funds to individual securities. 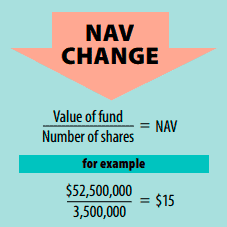 A fund’s NAV is the dollar value of one share of the fund’s stock. It’s figured by dividing the current value of the fund, minus fees and expenses, by the number of its outstanding shares. A fund’s NAV increases when the value of its holdings increases. For example, if a share of a stock fund costs $15 today and was $9 a year ago, it means the value of its holdings increased, its expenses decreased, the number of fund shares decreased, or a combination of these factors caused the change.

Yield measures the amount of income a fund provides as a percentage of its NAV. A long-term bond fund with a NAV of $10 paying a 58 cent income distribution per share provides a 5.8% yield.

You can compare the yield on a mutual fund with the current yield on comparable investments to decide which is providing a stronger return. Bond fund performance, for example, is often tracked in relation to individual bonds or bond indexes. 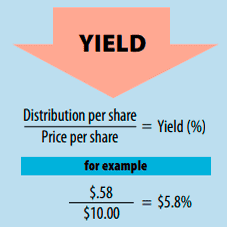 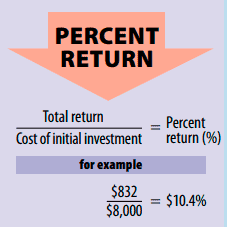 A fund’s total return is its increase or decrease in value including reinvested distributions. Total return is typically reported as a percentage, or percent return, which is calculated by dividing the dollar value of the total return by the initial investment.

The most accurate measure of a mutual fund’s performance is its total return, or change in value plus reinvested distributions. The total return is reported for several time periods, typically for as long as the fund has operated.

When the figure is for periods longer than a year, the number is annualized, or converted to an annual figure. It’s calculated as a geometric mean, which is more accurate for numbers multiplied in a sequence than a simple average return is. Annualized figures reflect the impact of gains and losses over the period that’s being tracked. But they don’t report whether the return represents a fairly consistent performance from year to year or a seesaw of ups and downs.

Among the key factors that influence total return are the direction of the overall market in which the fund invests, the performance of the fund’s portfolio, and the fund’s fees and expenses.

Why mutual funds are good for long-term investing?

Most financial experts stress that mutual funds are best suited for long-term investing. They believe you should ignore the short-term peaks and valleys and be unconcerned about finding the top-performing funds of the year. For one thing, the individual fund or fund category that provides the strongest return in one year is unlikely to be in that position the following year.

The experts also point out that you can identify a number of funds in various categories that have provided returns consistent with the appropriate benchmark year after year, though these funds may never make it to the top—or the bottom—of the performance charts.

Holding a fund for an extended period also allows you to amortize the cost of the front-end load if you’ve purchased Class A shares. In the short term, paying this load reduces your return since the amount of the sales charge is subtracted before your principal is invested. But if you stay in the fund, the effect of the sales charge may disappear over time. If you trade funds frequently, paying repeated sales charges can consume a big share of your potential earnings.

Another argument for maintaining a long-term perspective with a diversified portfolio of funds is that you decrease the risk of missing the periods of growth that often follow depressed or falling markets. It’s also true that selling a fund when its NAV has dropped means locking in any losses to that point, though you might decide that is a better choice than taking the chance of having an even greater loss.