Stock market tops occur when complacency is high, the news is good, and there are many divergences (fewer stocks carrying the indices higher). Market bottoms occur when panic is high, volatility is high, and correlations are high.

The investment picture going into 2022 is the relatively high probability the global economy will slow dramatically from the stimulative-driven pace we are now exiting.

Most concerning is the high level of leverage in the system: margin debt has exceeded the insane levels reached at the prior two bubble peaks.

Get your mind around this piece of data:

And where is a good portion of that money coming from? Corporate share buybacks. A consequence of the Fed’s zero-interest-rate policy and the structure of executive stock option incentive packages.

Courtesy of Lance Roberts at RIA Advice, “The surge in the repurchase of shares over the last decade remains one of the more significant supports to the financial markets. (Such is because it is mostly the major market-cap-weighted names that can afford multi-billion share buybacks.)

The chart below via Pavilion Global Markets shows the impact of buybacks on the market over the last decade. The decomposition of returns for the S&P 500 breaks down as follows: 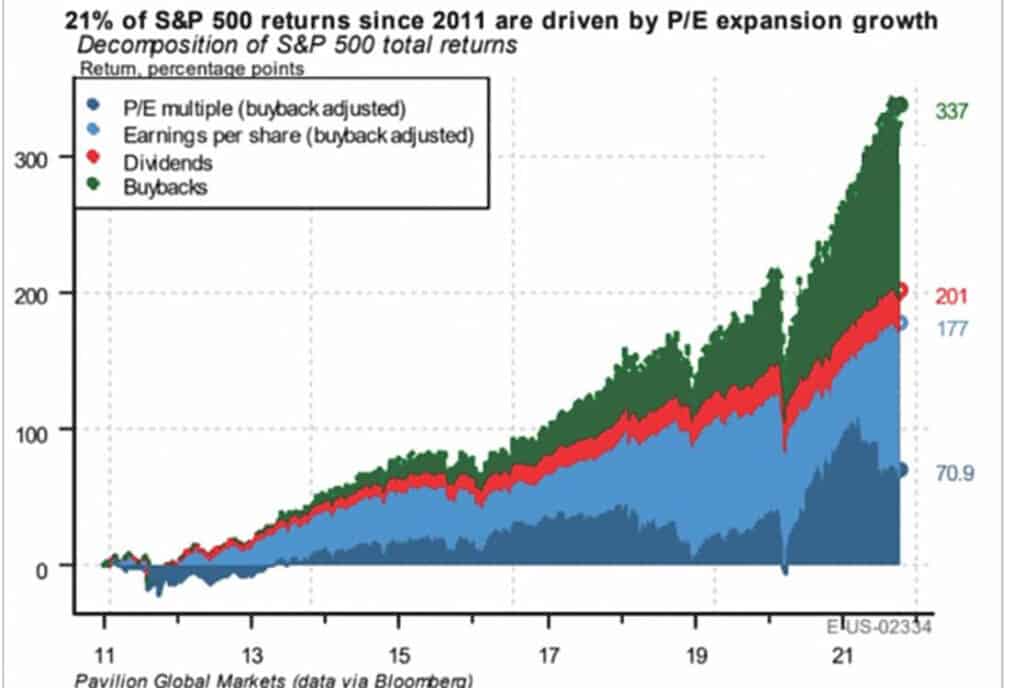 In other words, in the absence of share repurchases, the stock market would not be pushing record highs of 4700 but instead levels closer to 2800. The risk to stocks is a reversal of that support from the Fed.”

This helps explain some of the record inflows into U.S. equities. With individuals, foreigners, and corporations all in, one has to wonder where the future buying demand will come from. The salient point is the market is priced to perfection, euphoria is at an epic high, leverage has never been greater, and too few see the risks. 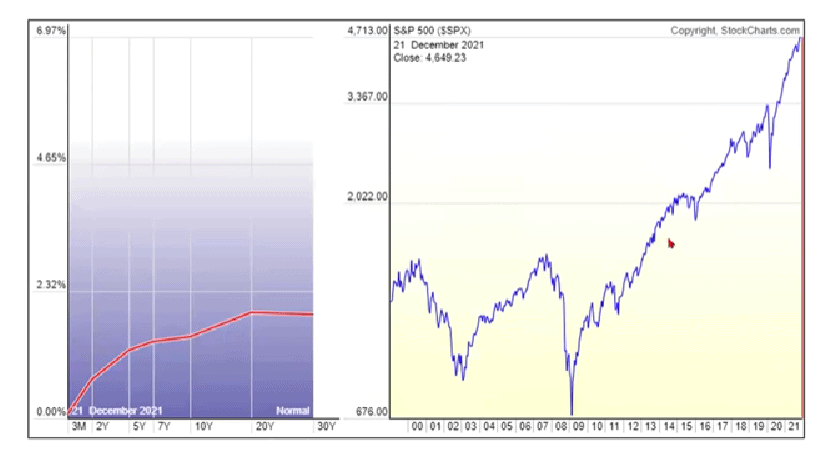 • A difficult first half of 2022 with the potential for a 30 percent or greater market decline. (If yield curve turns to the downside – see chart)
• Fed responds aggressively and the equity market bottoms. Strong second half 2022.
• Similar to inflation cycles of the past, some moderation in inflation into mid-year. Inflation picks back up in the second half with the return of Fed Quantitative Easing (QE).
• Bullish outlook for 10-year and 30-year Treasury bonds. The 10-year yield may decline from 1.5% to 1% in the first half of 2022.

As we enter 2022, inflation is calling the Fed’s hand. The Fed is pulling liquidity from the system and anticipates raising rates three times next year. If I’m correct in my view that inflation, rising rates, and debt will lead to a meaningful economic slowdown (“stagflation”), then the first half of 2022 will surprise investors. A -30% market decline into mid-year is a real threat. If correct, I suspect the Fed will reinstate QE, we’ll bottom and we’ll be off to the races again. Watch COT and key economic indicators to give the signal (if any). Keep in mind, there are no signs of a recession yet. Moreover, the probability of a recession is very low (see chart below).

• Bullish dollar first half of 2022 favors a strong dollar as the global slowdown and market turmoil. Longer-term, bearish view on the dollar, but I wonder relative to what other currency. The developed world is collectively debasing its currencies.
• The outlook for gold is the opposite of the dollar. Long-term very bullish on gold with a target of greater than $5,000.
• Bullish on commodities, agriculture, uranium (nuclear fuel), and oil for the foreseeable future.

This is all a big “if” because many unknowable pieces exist. For example, we don’t know what role the Covid virus will play or what inflation will look like.

You and I can’t control the geopolitical risks: China/Taiwan, Russia/Ukraine, Iran’s apparent pursuit of nuclear weapons. And we can never know for sure what big liquidity guns the Fed may fire next. So the risk-on party may have more euphoria left in its run.

With all that in mind, the market could attempt to test the “fair value” in the S&P 500 Index around 2,800. Forward returns from that entry point should be close to the long-term historical returns for equities. Give or take 10% per year before inflation is factored in (no guarantees). However, Fed will be very fast to support the market in case of such pullback. Thus, giving us another buying opportunity! Much depends on the degree of leverage unwinding and the reaction from the Fed. I suspect the Fed will aggressively come back into play.