What Is Private Equity And How Does This Investment Work?

Nothing ventured, nothing gained is the principle driving private equity investing. Private equity is an umbrella term for raising private money to invest in business ventures. The firms that raise and manage this pool of cash tend to specialize in either venture capital or corporate buyouts.

Venture capital is often described as the engine of economic growth. It is easy to explain since it enables private companies to get started and grow while fostering invention and experimentation. Venture capital expects to make substantial profits on their investments. Though some of the companies in which they invest may provide disappointing returns or fail entirely.

Buyout firms, on the other hand, typically purchase existing private or public companies, restructure them, and then either sell them to other private investors or take them public.

Before venture capital firms make their investments they raise a pool of capital from accredited investors who meet the financial standards set by the SEC. This pooled investment fund is typically organized as a limited partnership in which the firm is the general partner and the investors are limited partners.

Unlike most investors, who are passive, venture capital firms take an active role in the management of the companies they invest in. To cover those costs, the firm charges the fund’s investors an annual management fee of 1% to 2% of assets in the fund plus a percentage — often as much as 20% to 30% of any eventual profits the fund makes.

Not all companies looking for venture capital are at the same stage in their growth, so firms tend to specialize:

Venture capital firms — often called VCs – may make straight equity investments or offer a combination of equity and debt. They may invest in a range of industry sectors, geographic locations, and growth stages or specialize in a particular sector, place, or stage. 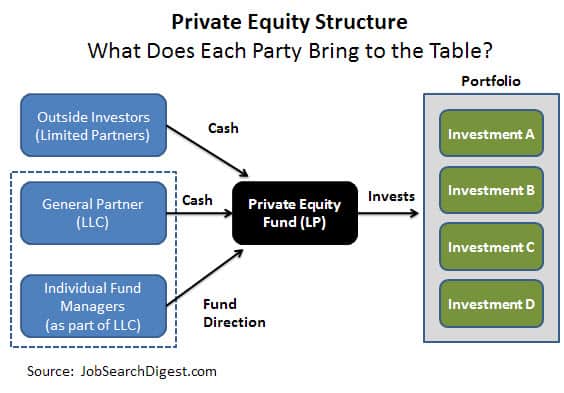 Buyout firms historically invest in later-stage, often large, companies that are vulnerable to takeover a variety of reasons. In some cases, the buyers combine cash with substantial amounts of debt to purchase target companies in what is often described as leveraged buyouts, or LBOs.

By taking the newly purchased companies private, at least for a time, the buyout firms can make potentially radical changes in structure and management without having to explain their actions or their costs to shareholders. The buyout firms attract investors for the same reasons that venture capital firms do: the long-term prospect of significant returns despite the substantial fee that the buyout firm takes off the top.

FEEDING THE FEES
Wealthy individuals can invest in private equity through a feeder fund organized by a brokerage firm that channels money to a master fund operated by a private equity firm and often focused on a particular industry or strategy. Minimum investments may be smaller. Fees are not

However, affluent individuals can sometimes gain access to private equity partnerships by investing in a fund of funds, which holds interests in a selection of these partnerships. In most cases, though, investing through a fund of funds is likely to mean another layer of fees on top of those owed to the partnership, with a substantial percentage of the eventual profits going to the fund of funds managers.

SEC RULES
Like hedge funds, private equity funds with more than $150 million in assets must register as investment advisers with the SEC. Some but not all have registered as broker-dealers.

During the term of a private equity investment, those who invest are not able to cash out, and in most cases do not receive any income. However, there may be a sizeable reward for accepting the high risk and illiquidity. That is, the eventual returns that may be higher than if the money had been invested in the market over the same period of time. There are generally three potential exit strategies for venture capital:

In an IPO, the private company is transformed into a company with publicly traded shares. As an investor in a private company, you receive stock in the now-public company equivalent to the value of your investment. In most cases, there are restrictions on how soon you can sell your new shares on the open market. This lock-up period is usually at least six months and often graduated, which allows you to sell an increasingly larger portion of your shares over a two-year period. While an IPO may sound the most exciting it is, on average, no more or less lucrative for investors than other strategies.

The most common, and often most successful, exit event is a merger or acquisition. In this case, the private company is bought by or merged with another established company, which might or might not be public. As an original investor, you receive equity in the new company, a cash payment, or both.

A recapitalization, also called a secondary buyout, occurs when one venture capital firm sells its stake to another, at which point investors in the original fund are cashed out.

What Is Private Equity And How Does This Investment Work? by Inna Rosputnia