Market ups and downs can’t be predicted accurately – though they often can be explained in hindsight. The ups and downs of a market, like the ups and downs in the value of an individual stock, are driven by investor behavior. If investors are putting money into the market, it gains value. If they’re pulling money out, the value drops.

Most of the time the strength or weakness of the stock market as a whole is directly related to economic and political forces. For example, when earnings are strong and interest rates are low, indexes tracking stock prices tend to rise. But when corporate earnings fail to meet expectations or investor confidence is shaken, stock prices drop, or the market is flat, or stagnant.

The stock market moves up and down in recurring cycles, gaining ground for a period popularly known as a bull market. Then it reverses and falls for a time before heading up again. Generally, a falling market has to drop 20% before it’s considered a bear market. Sometimes market trends last months, even years.

Overall, bull markets have tended to last longer than bear markets. But drops in the market tend to happen quickly, while gains take more time. It’s much like the law of gravity: it takes a lot longer to climb 1,000 feet than to fall that distance. Markets also experience corrections, or across-the-board losses, that aren’t as severe or sustained as a real bear market.

Moving with the cycles

Pinpointing the bottom of a slow market or the top of a hot one is almost impossible — until after it has happened. But investors who buy stocks in companies that do well in growing economies — and buy them at the right time — can profit from their smart decisions or their good luck.

One characteristic of expanding companies is their ability to raise prices as the demand for their products and services grows. Increased income means more profit for the company and may also mean larger dividends and higher stock prices for the investor. 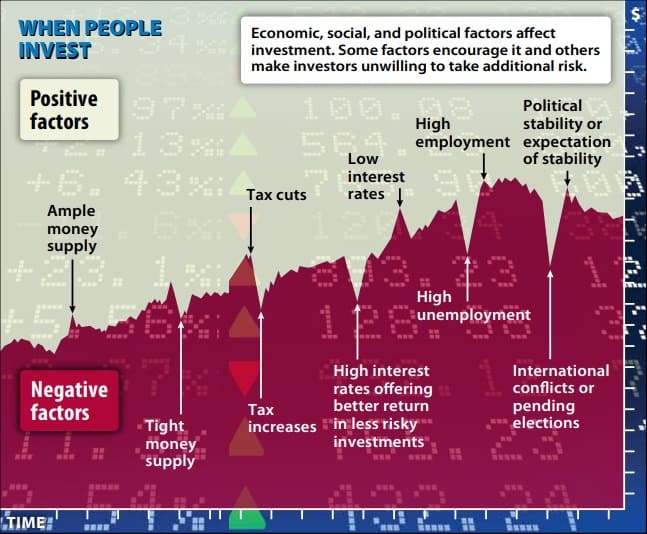 It’s generally difficult to predict which companies will falter during a downturn and which ones will survive and prosper. No economic cycle repeats earlier ones exactly. So the pressures that companies face in one recession aren’t the same ones they face in another. In most cases, though, long-term financial success depends more on the internal strength of the company and the goods or services it provides than on the state of the economy.

Stocks typically produce their strongest returns in recognizable economic climates. For example, when interest rates are high, cash equivalents, such as Treasury bills, tend to provide a stronger-than-average return and stock returns tend to be disappointing. Correlation is a measure of how similarly or differently two asset classes behave in a particular climate, ranked on a scale from —l to l. If the values of two classes always rise and fall together, their correlation is l. If they always move in opposite directions, their correlation is —l. In addition, some asset classes, such as stocks and nontraded REITs, are noncorrelated because their returns are influenced by different factors rather than different reactions to the same factors.

The strategy called asset allocation stresses the importance of including negatively and non-correlated assets in an investment portfolio as a defense against the cyclical downturns that affect each of the asset classes at certain times.