Best Ways To Raise Capital For Your Business

Capital is the lifeblood of businesses, large and small.

Companies typically need capital infusions at several stages in their lives: at birth, as they grow, and if they’re facing financial problems. Fortunately, they can seek capital from several sources, and each source has some advantages as well as potential drawbacks. Availability may vary depending on the age and size of the company.

Imagine for a moment that you want to start a company. You’ll need capital to buy equipment, set up an office, hire employees, and attract clients, among other things. Most of the start-up capital — also known as seed capital — may be your own money. You may liquidate your investments, tap your bank accounts, or maybe even mortgage your home to get the capital you need.

The good thing about using your own capital to finance your enterprise is that you don’t incur any obligations to others, and you maintain control because you’re the only one with a stake. The risk, of course, is that if your business fails, all the money you lose is your own. And unless you’re unusually wealthy, there’s probably a limited amount of money you can — or are willing to — invest.

Most equity investors enjoy limited liability status. This means the most they can lose is the capital they invest. The distinction of being the first limited liability company goes to the British East India Company, which was formed in 1662.

A second major source for raising seed capital is friends and family or other early-stage investors who are willing and able to commit money, either buying an equity interest or providing favorable-rate loans. As a group, they’re known as angel investors, though they may not all be saints.

Private companies may seek funding from venture capital firms — often referred to as VCs — that specialize in investing large sums at a particular stage of a company’s development. While some venture firms may assume the risk of backing start-ups, the majority invest in companies that seem poised for significant growth or that operate in a particular industry in which the VC firm specializes.

Venture capitalists are willing to take bigger risks than most other suppliers of capital because they have enough resources to make substantial investments in several companies at the same time. While each business by itself may pose a significant risk, if even a few succeed the venture capital firm may realize large profits.

Venture capitalists may consider hundreds of businesses before they find the handful that show the right potential. They then provide an infusion of capital either as loans or in exchange for equity, including the right to share in the company’s profits. Ownership rights also give venture capitalists a say in how the companies they invest in are run, and, in some cases, there may be provisions for additional controls or increased equity if certain financial targets are not met.

Investment banks can also arrange for companies to get financing through private placement. In that case, a smaller, limited group of wealthy investors is offered the opportunity to invest. Private placements don’t have the same registration and reporting requirements as public offerings.

Venture capital involvement isn’t necessarily a bad deal for a company, however, since VCs generally have experience in a particular market and can provide valuable insights, business contacts, and financial management. But in accepting capital from outside investors, businesses do concede a degree of control or assume an obligation to their new partners.

Venture capitalists also play a major role in determining what happens to the companies they invest in. Typical outcomes include a merger with or acquisition by a larger firm or an initial public offering (IPO). 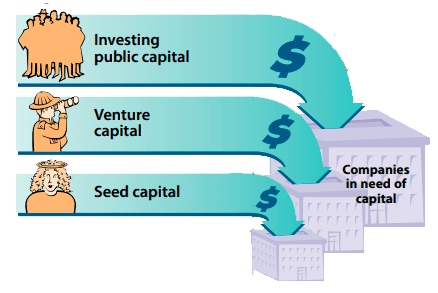 Not even the wealthiest venture capital firms can provide as much capital as the capital markets, where retail and institutional investors buy stocks and bonds. A company can often raise significant amounts of money by selling stock through an IPO. And a company with a solid financial record can often borrow more cheaply by selling bonds than it can by taking a bank loan.

The decision to turn to the capital markets for financing opens up a massive source of cash — but it also affects how the business operates. Companies that issue stock must grant shareholders certain rights. And companies that issue debt securities, such as bonds, enter into legally binding contracts to repay.

Some of the biggest players in the capital markets are large, multinational firms known as investment banks, which specialize in corporate financing. That means providing services and advice to companies that want to raise capital or are involved in mergers and acquisitions.

Investment banks help companies determine the best way to secure financing: through debt or equity, using private placement or public offering. Then they help companies navigate the requirements and paperwork involved in registering and offering securities for sale, including underwriting the offering — finding buyers and setting prices. Investment banks can also create new investment vehicles out of existing entities, cutting them up or combining them to offer specialized products for certain investors.

Businesses may also be able to raise a limited amount of capital by applying for bank loans, though borrowing may have certain drawbacks. First, since repayment begins as soon as the loan is secured, monthly cash flow is affected. Second, the bank is likely to demand collateral, or security, for the loan.

But a major advantage of raising capital with a loan is that once it’s paid off, the company hasn’t given away any equity. If the company succeeds, the original owners derive all the benefit of the increased value.

Best Ways To Raise Capital For Your Business by Inna Rosputnia