How To Use Point and Figure Charts?

There is an advantage to Point and Figure charting; it doesn’t take very long to keep many charts because you are not recording each day’s open, high, low and close like you are with candlestick and bar charts. Instead you are recording only when price moves by a certain amount.

The charts are constructed by deciding on the value represented by each X and O. Any price change below this value is ignored. So, Point and Figure acts as a filter to remove the smaller price changes. If the price does not move by that amount; nothing is done for the day.

The charts change columns when the price changes direction by the value of a certain number of points or dollars. Traditionally this was one dollar and is called a One Box Reversal chart. Most traders now use a Three Box Reversal meaning price must move an increment of three chart units.

In the creation of Point and Figure, the emphasis is only on the closing price. The developers of Point and Figure charting were interested in trend development and thus were concerned not with the noise created daily by minor moves up or down, but with the larger picture and how that plays out in the areas of supply and demand.

The key to Point and Figure charts is the establishment of the unit of price, which is the unit measurement of a price movement that is plotted on the graph. As I said, on Point and Figure charts, there is no time axis, only a price axis. Rising stock prices are shown with X’s and falling prices are shown with O’s. These points appear on the chart only if the price moved at least one unit of price in either direction.

If the closing prices of a stock moved up one price unit three times. This would appear as a column of three X’s. If the price movement reverses direction, then the chart shows a new column of O’s, wherein an O is plotted for each unit of price movement. X’s and O’s never appear in the same column. The chartist, however, must establish how many price units make up a box, which is how much the price must move in the opposite direction for the chart to begin a new column.

The chart above shows a Point and Figure chart with the X’s and O’s. The X’s are in blue representing rallies while the declines are represented by the O’s.

For example, you are trading stocks with a current price of $35 a share, and you were using a $1 unit measurement and a reversal box is three units. Now, if the stock had been trading upward to $35, the stock would have to close at $32 before the chart would reverse to a column of O’s. It could trade at 35, 34, and 33, but there would be no change in your chart. Because the next reversal would have the stock trading down at least $3, or three points, before a new column of X’s came back into view on our Point and Figure chart.

Assume then that the issue continues to fall to S30 before reversing itself; the X’s would reappear once the price hits S33. Remember, you choose the unit size. It could be $0.50, $1 or even $2 if the stock price is high enough. Graphically, the first two columns of our example would look like this: 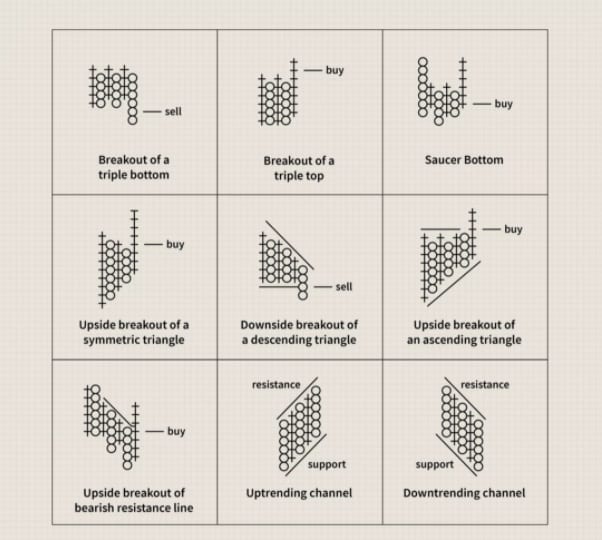 What Point and Figure chartists typically look for is a breakout of the congestion zone. Once they see numerous columns on a horizontal basis it is their belief that if the price rises above or below this table then prices will continue moving in the direction of the breakout.

How To Use Point and Figure Charts?