Suez Canal Blockage. Can SP500 traders profit from it?

Stock bulls look to remain in charge as both the S&P 500 and Dow close last week at fresh all-time highs. Bears think volatile could start to heat up as supply chain issues and surging coronavirus outbreaks overseas continue to complicate the global economic restart and return to  “normal.”

The Suez Canal is still blocked by the enormous “Ever Given” cargo ship, with over +350 vessels now waiting to pass through the channel. Authorities are hoping higher tides over the next couple of days may allow salvage teams to further dislodge the ship. However, if that fails, it sounds like the next option is to start unloading containers to lighten the load and in theory allowing the ship to be freed.

Some shippers began rerouting ships. But, these alternative routes will add time as well as higher costs, especially for the oil sector which is under pressure to get critical supplies delivered. Thus, the blockage is also further stretching the global supply of shipping containers which was already compromised. The container shortage alone has been causing shipping bottlenecks at critical U.S. West coast ports which companies have said is delaying restocking by as much as three to four weeks.

The longer the Suez Canal remains blocked, the worse the global shipping snarl is going to become. Moreover, it will take days to move the vessels that are blocked with further delays expected at destination ports as they absorb the backlog.

There is also the global semiconductor shortage that has been compounded by a factory fire in Japan. And those are just the snags grabbing the biggest headlines. There are shortages being caused by supply chain problems for everything from lumber to oilseeds to petrochemicals right now, all with varying timeframes for when they might be corrected, many not till later this year. Eventually, things will return to some aspect of “normal” but it is causing an extra layer of uncertainty right now with investors still unclear how these multiple issues may impact earnings in the quarters ahead.

On the pandemic front, the U.S. is starting to take very big steps with roughly 1 out 3 U.S. adults now having at least one shot of the vaccine in the arm and a record +3.4 million doses given this past Friday. And, it looks to me like there is soon to be a glut of vaccines available. Georgia has now fully opened eligibility to ages 16 and older. Kansas, Oklahoma, Texas, Ohio, and North Dakota follow by opening up to everyone 16 and older today. Indiana on Wednesday. Montana and California on Thursday. Connecticut, Michigan, Tennessee, Florida, and Missouri next week.

Other nations are not progressing nearly as well, Brazil and other parts of South America are imposing new restrictions as the virus surges. In fact, there are growing worries that supply chain problems could worsen in South America if more workers fall ill as some local authorities are already pushing talks about temporarily shuttering port operations. The Philippines is reporting a fresh record number of new cases. Also, Poland sees a massive resurgence. India reports virus numbers escalating back to levels not seen in months.

As for economic data, investors this week are anxious to see the March Employment Report on Friday. Wall Street insiders are looking for the unemployment rate to be around 6% with a gain of between +650,000 to +1 million new jobs.  Remember, if we see more jobs being created and more people going back to work at a faster pace than expected, bears will again starting pointing towards inflation and the associated headwinds, which could perhaps spark another rally in bond yields and put downward pressure on stock prices. The yield on the 10-year Treasury note has risen from under 1% in early January to over 1.6% currently. Inflation is also in the spotlight on Thursday with the ISM Manufacturing Index expected to show some costs continuing to rise.

Today, the Dallas Fed Manufacturing Survey is the only economic data on the calendar. Earnings I am interested in this week include FactSet, Chewy and Lululemon all reporting tomorrow, Micron reporting Wednesday, and Walgreens and Carmax on Thursday. 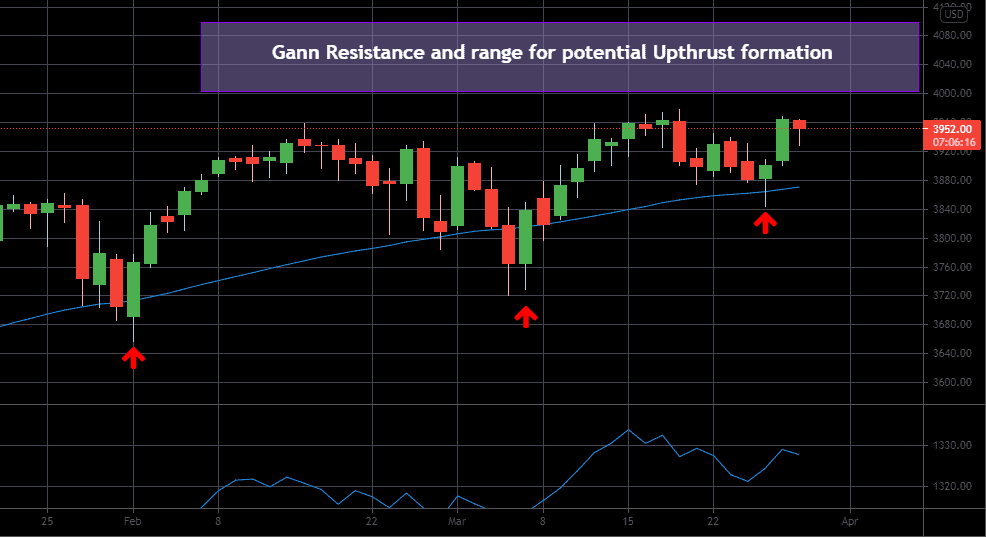 Not much has changed since my last SP500 forecast. However, Easter is coming… It’s not a 100% rule, but usually, we see strength in the stock market before this holiday. So, we can expect upthrust and test of Gann resistance between 4000 – 4100. Besides, based on the cycles we still have time till pullback starts. I am patiently waiting for the sell signal.  But, guys, as I mentioned last week don’t expect it will be the beginning of the bear market. There is no fundamental reason for that. The labor market is strong enough and the federal reserve is doing its job well.

Also, we may get an interesting trade at the begging of June. Based on cycles and Intermarket forecast we can expect the market to bottom and begin a new wave to the upside at that time. But let’s take it step by step. In the coming weeks, I will be looking for swing shorts in SP500. How deep could the market drop? Unfortunately, cycles don’t forecast an amplitude. And, we have to observe price action to set targets.  In general, I believe 8 – 15% pullback is realistic.

Suez Canal Blockage. Could it impact SP500? by Inna Rosputnia