Stock indexes are in record territory as we start the second-quarter and the first full week of April. Bulls remain optimistic as more Americans are vaccinated and more of the economy opens back up. The U.S. hit a new vaccine record over the weekend, administering +4 million doses in 24-hours. Several states have expanded vaccine eligibility to all U.S. adults, something state is expected to do by the end of April. One-third of the country has now received a shot!

A tracker from Jeffries shows activity across the country is at nearly 95% of the pre-pandemic level. United Airlines told staff it will soon begin hiring hundreds of pilots. The Chicago-based airline is the first of the large U.S. carriers to announce it will resume pilot hiring, the latest sign it’s preparing for a large economic recovery.

The Labor Department on Friday reported a much stronger-than-expected gain of +916,000 jobs in March with the unemployment rate ticking to sub-6%. January and February jobs data was also revised upward, adding +156,000 to the totals. March gains were strongest in the leisure and hospitality sector with +280,000 new jobs being added, while education added +190,000, and construction added +110,000 new hires. I should also note, data released late last week showed manufacturing expanding at the fastest pace since December 1983.

Bears argue that the big jump in jobs and manufacturing raises more concerns and questions about inflation and that the Federal Reserve may pull back on its asset purchases and raise its benchmark interest rate earlier than Wall Street is currently anticipating. Bulls, however, point to the fact there are still nearly 8 million fewer employed Americans than there were pre-pandemic, which they argue will help keep a lid on inflation.

Interestingly, the share of long-term unemployment rose again last month to 43.4%, approaching the all-time high of 45.2% reached during the Great Recession. The labor force overall is down by almost -4 million, meaning those workers have dropped off the unemployment rolls and given up looking for work.

Economic data today includes Factory Orders and the ISM Services Index. Other key data this week includes JOLTS tomorrow, International Trade and Consumer Credit on Wednesday; and the Producer Price Index on Friday. PPI will likely draw a lot of scrutiny with investors looking for signs of building inflation pressures.

This week also brings the release of the Fed’s “minutes” from its March policy meeting. Fed President Jerome Powell speaks at an event on Thursday. There is also some international data this week that investors are interested in, including PMI numbers for France, Germany, and the Eurozone on Wednesday.

Also on the agenda this week, the International Monetary Fund and World Bank’s Spring meetings begin today and run through Sunday. The IMF will release its updated World Economic Outlook tomorrow (Tuesday), which is expected to lift the forecast for global growth to around +5.5%, up from +4.9% projected in January. Just a couple of weeks ago, IMF Managing Director Kristalina Georgieva raised the alarm bells about a possible debt crisis brewing in emerging market economies, which accounts for roughly half the world economy. IMF’s update is likely to highlight the issue in more detail and will be of interest to the larger macro traders. The trade is also growing more interested in the escalating tensions between China and Taiwan so we must continue to pay close attention. 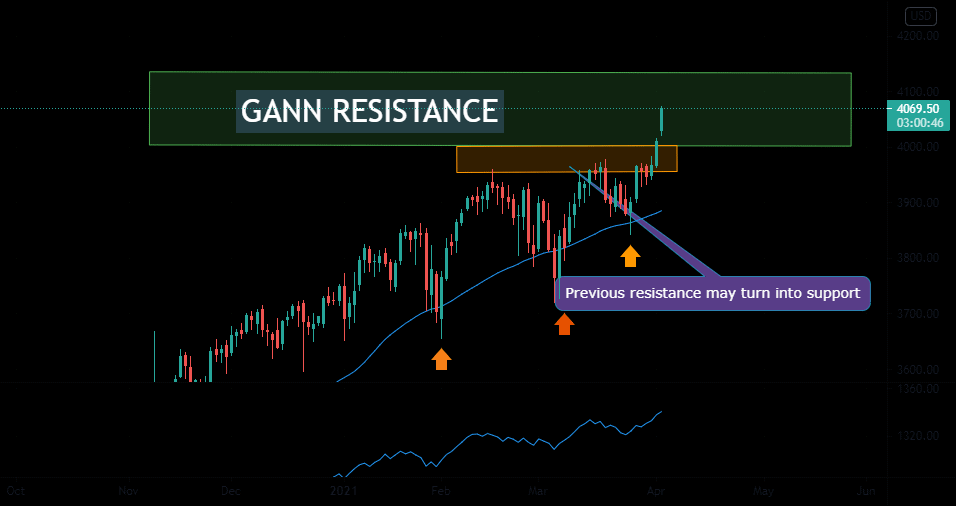 As we expected SP500 reached massive Gann resistance. I am not sure if it tests the upper range (4100) within this wave. This move was news driven. And, as you likely know in most cases it offsets within the next few sessions. Let’s see how it plays this time. My biggest concern is mixed signals. You know I like to follow cycles and they are about to turn to the downside and possibly bottom at the beginning of June. However, Advance Decline Line is very bullish. So, I decided to stick to price action at key levels.

Rejection at any range within Gann’s resistance can give a start for a pullback. Other than that, the range between 4000 and 3960 (previous resistance) can turn into support. Also, pay special attention to daily MA50. As you see on the chart above it provides a great buying opportunity every time price tests it. In any case, I will stick to small targets till cycles and ADL generate the same signal.

Will SP500 Pullback? Forecast and Market Outlook by Inna Rosputnia