I believe all of you became masters in using Wyckoff Method, as we recently had a deep look into it. Today I want to start new topic and tell you about other star of technical analysis – WD Gann. I use his theory in my complex analysis and building portfolios for managed accounts.
Mr. Gann developed such great tools as Gann angles, Square of 9, Circle of 360. His theory is based on antient mathematics, geometry and even astronomy and astrology. Can you imagine that? It sounds weird, but his theory is very accurate. As you know in 1933 Gann made 479 trades. 422 of them were profitable!
Based on my experience, I can say, that Gann Theory works great in complex with other methods. Swing traders have to add it to their tools – no doubts. It’s less effective for intraday traders.
“Do not trade or invest if motivated by hope, greed or fear,” Gann declared. Instead, rely on an analysis of stock price trends. It will be worth to mention that Gann created balanced portfolios always. He warned against placing more than 10% of capital in any one security. To identify a trend Gann relied on price changes over time. He paid special attention to ratio of price changes to units of time as reflected in the angle of the trendline when it was charted.
What does 1:1 ratio means? – In one unit of time (day, hour etc depending on what TF you use), the trading instrument (commodity, stocks etc) moved up or down one point. On the chart it looks like a line at a 45-degree angle. By Gann it’s the strongest indicator of a continuing trend. I think you have heard about “Gann angles.” Other angles indicative of the strength of a trend, according to Gann, are (in order of importance) the angles created by ratios of 2:1, 1:2, 4:1, 1:4, 8:1, and 1:8. 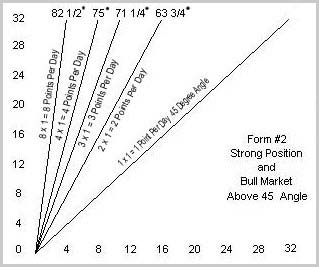 Based on his theory the angles formed over 30-day periods the most accurate show the resistance and support levels. In case if the 30-day period was not conclusive, Gann recommended that 90-, 120-, 180-, 240-, 270-, and 360-day periods be used. He also stated that the overall market moves in various cycles that range from 10 to 100 years in length.
By the way you can make quick check of his study. Every fifth year of a decade (every year ending in a zero or a “5”) is a bullish year for the US30 (Dow Jones) by Gann. Just check charts from 1905.
In my next post I will explain in details how to use his theory.